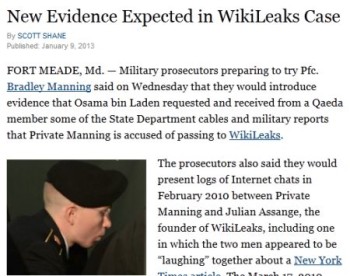 In the ongoing case against Private Bradley Manning, a military prosecutor, Capt. Angel Overgaard, revealed that if the New York Times had first received the restricted government documents leaked by Manning, instead of Wikileaks, that he would still be facing criminal charges.

The New York Times reports, “Colonel Lind, the judge, asked a prosecutor the hypothetical question: If Private Manning had given the documents to The New York Times rather than to WikiLeaks, would he face the same charges? ‘Yes, ma’am,’ said the prosecutor, Capt. Angel Overgaard.”

The key point for media watchers in this Jan 9 online/Jan 10 print Times story is buried in its last two paragraphs.

The Times states that many media outlets published Julian Assange’s infamous Wikileaks documents, including the Times.

The New York Times next writes about the threat, in principle, to itself:  “The Justice Department is carrying out an investigation of WikiLeaks to determine whether Mr. Assange or his associates can be charged with a crime.”

This means if the Times had gotten the documents from Manning first, hypothetically, its editors (but for the grace of God) instead of Assange could be in the crosshairs of U.S. government enforcement.

The New York Times, at this chilling thought, quickly refers to unnamed “media advocates”– not The Times itself–to say “such a prosecution would be a dangerous precedent for news organizations like The Times that frequently obtain and publish information the government considers classified.”