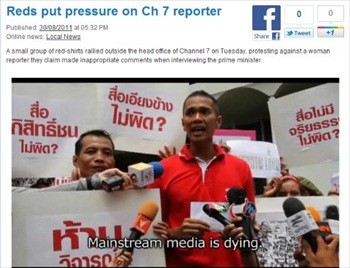 Nawakruasunthorn is Channel 7’s political reporter and is accused of breaking journalism ethics guidelines.  Channel 7 has rejected claims that she should be let go from her position in response to the protest, according to the Bangkok Post.

In a follow-up report, the Bangkok Post explained that the Thai Broadcast Journalists Association and the News Broadcasting Council of Thailand joined together in asking the protestors “to stop trying to intimidate the media.”