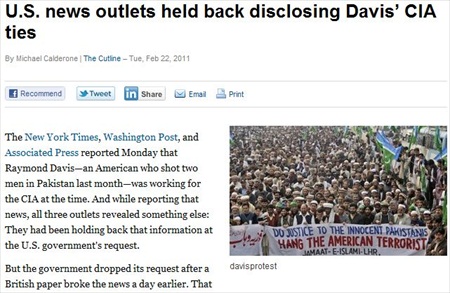 YahooNews reported that the Washington Post and the Associated Press also agreed to the U.S. government's request that they and the New York Times would not publish Raymond Davis' ties to the CIA--until the Guardian published, that is. (Credit: YahooNews)

The New York Times’ public editor Arthur Brisbane responded to readers’ criticism and defended the newspaper for granting the Obama administration’s request to not publish Raymond Davis’s “connection to the Central Intelligence Agency.”

As Brisbane noted, Davis “was charged with murder after shooting two Pakistani men in Lahore on Jan. 27” and the Times followed the Obama administration’s requests that it not publish any “speculative” material linking Davis to the CIA — that is, until after the Guardian decided to.

The decision to obey the government’s request led to sharp criticism, including from Salon’s Glenn Greenwald, who described the action as “being an active enabler of government propaganda.”

But, was the Times “misleading” by withholding information?  Times’ Washington bureau chief Dean Baquet said to Brisbane that “we tried our best not to be misleading.” And, Brisbane cited  Feb. 11 article as an example of a stories that “contained material that, in the cold light of retrospect, seems very misleading.”

Brisbane ultimately agreed with the decision to withhold publication, though:

“As profoundly unpalatable as it is, I think the Times did the only thing it could do. Agreeing to the State Department’s request was a decision bound to bring down an avalanche of criticism and, even worse, impose serious constraints on The Times’s journalism. The alternative, though, was to take the risk that reporting the C.I.A. connection would, as warned, lead to Mr. Davis’s death.’

Brisbane offered background on the government’s request and the Times’ agreement.  P.J. Crowley, the spokesperson for the U.S. State Department, reportedly asked the New York Times’ executive editor Bill Keller “not to speculate, or to recycle charges in the Pakistani press.  His concern was that the letters C-I-A in an article in the NYT, even as speculation, would be taken as authoritative and would be a red flag in Pakistan,” Keller explained.

Yahoo News added the Washington Post and the Associated Press to the list of news outlets that “had been holding back that information at the U.S. government’s request” and noted that the U.S. government “dropped its request after a British paper broke the news a day earlier.”

After the Guardian reported the CIA connection, the U.S. government reportedly asked another favor of the Times — to not publish for another day so the U.S. could  “secure Pakistani authorities’ commitment to place Mr. Davis in the ‘safest possible location.'”

While the decision was “brutally hard,” Brisbane wrote, the Times had to trust the State Department, lest it be “reckless.”

“Editors don’t have the standing to make a judgment that a story — any story — is worth a life. I find it hard to second-guess the editors’ assessment that the State Department’s warning was credible and that Mr. Davis’s life was at risk in a country seething with anti-American feeling.”

“I’d call this a no-win situation, one that reflects the limits of responsible journalism in the theater of secret war.”

Bob Woodward weighed in on the decision to publish or protect, Brisbane reported.  Woodward explained:  “You just don’t want to get someone killed.  I learned a long time ago, humanitarian considerations first, journalism second.”

The Guardian’s Feb. 20 report reported that Davis “is a CIA agent who was on assignment at the time.” The Guardian went on to state:

“Pakistani authorities charged him with murder, but the Obama administration has insisted he is an “administrative and technical official” attached to its Lahore consulate and has diplomatic immunity.

“Based on interviews in the US and Pakistan, the Guardian can confirm that the 36-year-old former special forces soldier is employed by the CIA. ‘It’s beyond a shadow of a doubt,’ said a senior Pakistani intelligence official.”

In the New York Times’  Feb 21 report it disclosed that it “had agreed to temporarily withhold information about Mr. Davis’s ties to the agency at the request of the Obama administration, which argued that disclosure of his specific job would put his life at risk. Several foreign news organizations have disclosed some aspects of Mr. Davis’s work with the C.I.A”

The Guardian’s deputy editor, Ian Katz, stated that the U.S. government asked the Guardian to withhold the information as well, but that it “went ahead with the story,” according to Yahoo News.

The New Yorker called Brisbane’s column “puzzling” and listed questions about the decision to not publish CIA speculation, including: “what was the risk to Davis, exactly,” if his CIA affiliation was revealed.  “One could just as easily argue that news that the American media covered up for Davis would make the Pakistani public even madder, and less willing to trust American justice and intentions, encouraging vigilantes,” wrote the New Yorker.