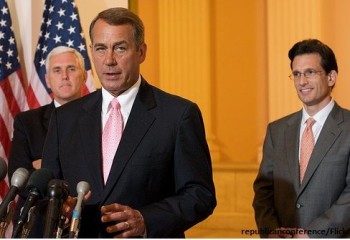 A new poll is being advertised as one that “convinces House Republicans they can win on the debt limit.” House Speaker John Boehner announced the results of the Winston Group poll to his party colleagues in the House, noting that 60% of Americans said they oppose increasing the debt ceiling, while only 33% favor it.

But beware of any single poll predicting public reaction to the coming debate over the debt ceiling. Remember, we’ve been through this polling controversy before, in the summer of 2011.

At the time, Mark Blumenthal of Huffington Post noted the many conflicting poll results on the issue, in large part caused by a public that was generally clueless about what the debt ceiling actually means. Different question wording produced significantly different results, because most people really didn’t have a fixed view about the issue, and were thus highly influenced by what the pollsters told them.

An indication of how little Americans know about the debt ceiling is found in that recent Winston Group poll. Here’s the question:

“The debt ceiling for the nation is going to be reached at the end of December, meaning the country cannot borrow money to fund the government at its current level by the middle of February. Would you favor or oppose increasing the debt ceiling?” (Favor 33%, Oppose 60%)

Note there are no qualifications attached to this refusal, such as conditional opposition unless there are significant spending cuts. Sixty percent of respondents chose an option that is simply a flat-out rejection of raising the debt ceiling, period.

One would be hard-pressed to find any member of Congress who would agree to this position.

Yes, many Republicans want to hold off raising the debt ceiling until the Democrats and President Obama agree to cut spending on government programs, but no one is arguing that the debt ceiling should not be raised ever.

That’s because politicians in Washington, apparently unlike  most Americans, recognize that irrespective of whatever debt ceiling the Congress and president have passed into law, the government is obligated to pay its debts. Those debts are the results of laws passed by the Congress and signed by the president. It the government refuses to pay its debts, it will create financial havoc in this country and around the world.

As the public becomes more aware of the implications of the debt ceiling, polling results will undoubtedly change. It’s too soon to know now how the controversy will play out this time compared with 2011, when the Dow lost 2,000 points during the markets’ uncertainty over resolution of the debt limit issue, and  Standard and Poor downgraded the U.S. credit rating from the triple-A level.

President Obama has vowed that this time he will not negotiate about the debt ceiling, saying that “One thing I will not compromise over is whether or not Congress should pay the tab for a bill they’ve already racked up.” On the other side, Republicans have strongly indicated their intentions to demand spending cuts in return for raising the debt ceiling.

So, relying on any single poll taken now to predict how the public will react to the coming debate (conflict, fight, donnybrook, whatever!) over the debt ceiling is, to put it mildly, a bit premature. Public opinion is not yet fixed. It has still to be shaped.