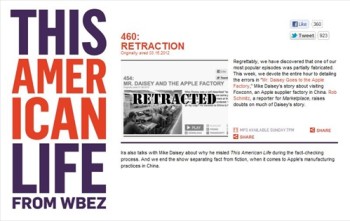 Public radio program This American Life retracted a report on Apple by Mike Daisey that was “the single most popular podcast” in the show’s history.  Daisey’s show is a monologue about “how [Daisey] visited a factory owned by Foxconn that manufactures iPhones and iPads in Shenzhen China.”  See here the transcript of the Jan. 6 program.

This American Life issued a March 16 press release about the retraction explaining that the show ‘can’t vouch for the truth” of the program.

According to the press release, following the first broadcast of the Daisey segment, Marketplace China Correspondent Rob Schmitz questioned the accuracy of the program and fact checked it himself with “Daisey’s Chinese interpreter Li Guifen,” who “disputed much of what Daisey has been telling theater audiences since 2010 and much of what he said on the radio.”

The press release noted that This American Life’s fact checkers tried to verify his report with Daisey’s translator, but Daisey gave a different name and said she didn’t have a working phone number for her. This American Life host Ira Glass commented that “at that point, we should’ve killed the story. But other things Daisey told us about  Apple’s operations in China checked out, and we saw no reason to doubt him. We didn’t think that he was lying to us and to audiences about the details of his story. That was a mistake.”

Glass added “too many details about the people [Daisey] says he met are in dispute for us to stand by the story.”

Glass also blogged about the retraction noting that “this is not a story we commissioned.” He added: “Daisey lied to me and to This American Life producer Brian Reed during the fact checking we did on the story, before it was broadcast. That doesn’t excuse the fact that we never should’ve put this on the air. In the end, this was our mistake.”

The This American Life press release explained that “some of the falsehoods” Daisey aired “are small ones” like “number of factories visited” or “number of workers he spoke with” but “others are large.”  For example, his story about “a group of workers who were poisoned on an iPhone assembly line by a chemical called n-hexane” did happen, but were in a different place “nearly a thousand miles away.”

In the press release, Daisey is quoted as saying “it was completely wrong for me to have” his monologue on This American Life.

Daisey also issued a March 16 statement on his blog here.  He noted “I stand by my work” and explained:  “My show is a theatrical piece whose goal is to create a human connection between our gorgeous devices and the brutal circumstances from which they emerge. It uses a combination of fact, memoir, and dramatic license to tell its story, and I believe it does so with integrity.”

“What I do is not journalism. The tools of the theater are not the same as the tools of journalism. For this reason, I regret that I allowed THIS AMERICAN LIFE to air an excerpt from my monologue. THIS AMERICAN LIFE is essentially a journalistic ­- not a theatrical ­- enterprise, and as such it operates under a different set of rules and expectations. But this is my only regret. I am proud that my work seems to have sparked a growing storm of attention and concern over the often appalling conditions under which many of the high-tech products we love so much are assembled in China.”

The Washington Post’s Erik Wemple called This American Life‘s reaction to the incident “reassuriing” because of the program’s transparency about the error and taking responsibility.