"Gossip Cop" weighs in: Madonna's "scary arms" photo is most likely a fake

"Gossip Cop" weighs in: Madonna’s "scary arms" photo is most likely a fake 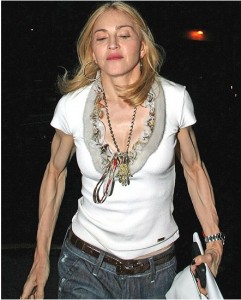 Gossip Cop, a new website that "polices" fake reportage and rumors about celebrities called MatrixPhotos.com to ask if their now infamous photo of Madonna's "scary arms" was doctored. (Hummm. They did not respond with a denial). Such attempts to verify information circulating the web is a much welcomed ethical practice that will benefit the public and the celebs who suffer inaccurate reportage.

There appears to be a new sheriff in town. After seemingly endless years of fake information about celebrities, Gossip Cop is a new website that focuses on correcting errors in gossip reportage, or as they put it –“Busting bad dish!”

The About us section states: “GossipCop.com was created to police the gossip industry. Launched in July 2009, it is the go-to destination for credible celebrity news. Every day the site separates fact from fiction, and has fun doing it.” They are currently surveiling “more than 200 websites, TV shows, newspapers and magazines.”

Michael Lewittes, “a reformed gossip columnist who knows the industry inside and out,” founded the site. If a reader looks behind the cloying police enforcement puns, Gossip Cop adds welcomed verification steps to daily circulations of dubious celebrity items that include fake photos. (Too-cute-by-half puns include swapping the typical website categories: “Most Read” becomes “Most Wanted Stories,” “Related” stories become “Prior Offenses,” and they warn that “anything the gossipers report wrong can and will be used against them.” Ouch).

A good example of how Gossip Cop adds fact checking to celebrity fare is their report on the purported “scary arms” photo of  Madonna circulating the web. See image above. Larger version, here.

Gossip Cop weighs in: “Newspapers and blogs have been up in arms about the latest photos of Madonna’s muscles, criticizing her for being too toned. Some have suggested she’s taking her workouts too far, and that she looks so vein-y. The Mirror blared in a headline, for example, ‘Madonna’s muscly arms – a walking biology lesson.’ ”

Forgiving the police punning, here are the keys that show their efforts to add ethical verification steps to their reportage.

Gossip Cop writes, “Her rep, however, tells Gossip Cop, ‘Madonna’s arms in the most recent photos have absolutely been altered by Photoshop or some other means. Her arms do not look like that in real life.’ ” Also, they report, “Gossip Cop never received an answer from the photo agency that shot her guns as to whether or not they played with her pythons.”

In other words, instead of just repeating rumors circulating the media, Gossip Cop picks up the phone and asks for verification from the parties involved. In this case, these were the photo agency who sells the photo and Madonna herself–both are called before publication.

Giving subjects an opportunity to respond and check facts before publication are the bedrock of ethical journalism. Gossip Cop is demonstrating compliance to the norms and guidelines known in good journalistic practice. See the Society of Professional Journalism (SPJ) ethics guidelines.

A sample of headlines from Gossip Cop stories indicates some fulfillment of the site’s promise to inject accuracy into false reports by first policing and later debunking celebrity gossip.

Since we can’t arrest and lock up erring celebrity gossip writers and publishers (just kidding–I think), Gossip Cop seems to offer a bit of hope to the public, who needs accurate information and celebrities, who suffer through the misreporting.

"Gossip Cop" weighs in: Madonna’s "scary arms" photo is most likely a fake