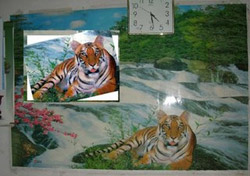 The poster was a smoking gun for the Chinese government

“Zhou Zhenglong, the farmer who shocked China with his fake photo of the endangered South China tiger, is to stand a public trial on Saturday morning, according to a notice by the People’s Court of Xunyang County in the northwestern Shaanxi Province on Wednesday…
“The 54-year-old from Zhenping county claimed to have photographed the tiger with a digital camera on the afternoon of Oct. 3 last year, and was rewarded by the Provincial Forestry Department with 20,000 yuan (2,915 U.S. dollars).”But doubts arose immediately on the internet, as some netizens found an old Lunar New Year commemorative poster in which the tiger resembled that in his photo.

“Police later arrested him after seizing an old tiger poster, which Zhou allegedly borrowed from a farmer in another village in September to produce his photos.”