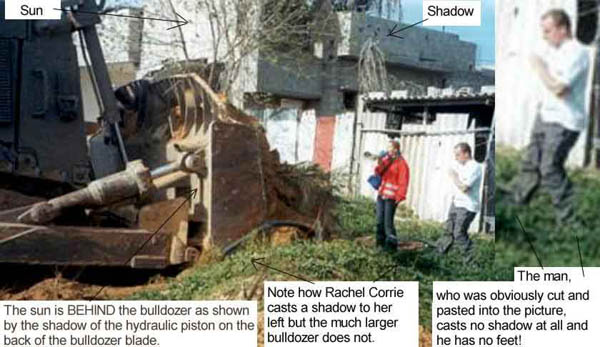 Journalist Lee Kaplan debunks a photo of the late, famed West Bank/Gaza activist Rachel Corrie standing in defiance of an Israeli bulldozer. Kaplan effectively argues that the shadows in the photo are all wrong, and worse, the man on the far right, has no feet--both clear indicators of a bad attempt at photo fakery.

The image certainly is dramatic –if it were true.

In 2006, Lee Kaplan, investigative journalist wrote an article in CanadaFreePress.com critical of a series of fake photographs circulated by the PLO and ISM to serve propaganda purposes, he argues, .

The late Rachel Corrie (killed during her activism efforts in the West Bank/Gaza) may be dramatically depicted in front of a bulldozer, Kaplan states, but the troubling differences seen in the photo between the figures and their cast shadows tell another story.

For example, Corrie’s shadow falls to the right of the photo, whereas, the bulldozer’s shadow is completely different and falls downward. The male figure is the most telling. He has obviously been cut and pasted into the scene. The man has no shadow and his feet are missing. See larger version of image here.

Clearly, this is a bad Photoshop job and a fake moment in history.