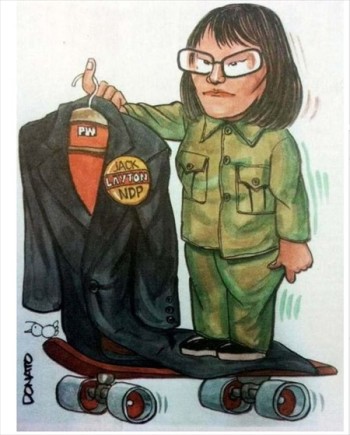 The cartoon in question

The Toronto Sun has been accused of publishing a racist cartoon of then-candidate for mayor Olivia Chow. (John Tory was elected mayor of Toronto last week.)

Chow moved to Canada from Hong Kong as a teenager, Yahoo News reported.  The cartoon was published the day before the election, Huffington Post noted.

Chow called the cartoon “disgusting” as well as “both racist and sexist.” The Sun is a conservative tabloid.

Chow, a member of the Canadian New Democratic Party (NDP), was pictured with slanty eyes and glasses wearing Chairman Mao-era clothes standing on the coattails of her late husband NDP leader Jack Layton. Layton died in 2011.

In an interview with CP24, Chow said:

“Because I am Chinese-Canadian, I must be a communist and have slanted eyes and glasses … and since I am a woman, I must be inferior and therefore not good enough for the job of the mayor so I must rely on my deceased husband. So it is both racist and sexist.”

She added, “It goes to prove that we need to stand firm against racism because it still exists.”

Further, she commented that it’s “quite outrageous” that such “racial stereotypes” are still at play.

The Toronto Sun issued a statement in response to criticism from both Chow and a complaint from the Chinese Canadian National Council, Toronto Chapter. Rather than own up to the offense such an image might have conveyed to the Asian community and to Canadian women in general, the Toronto Sun doubled down on its portrayal.

The Sun denied it “intended to promote racial or sexual stereotypes.” Instead the Sun claimed that its cartoonist Andy Donato often shows “NDP politicians in Mao suits” as a “political comment” not for “racial or ethnic connotations.”

“The reference to Jack Layton in the cartoon points out the political reality that part of Olivia Chow’s appeal as a candidate was that she was the widow of the late NDP leader,” the Sun said.

The Chinese Canadian National Council’s complaint, which was published Oct. 30 on the Sun‘s website, called for an apology from the Sun and its publisher. The council wrote in part:

“We urge the Toronto Sun and Mike Power to publicly apologize and to fully examine the underlying racism and xenophobia that are expressed by this editorial illustration. We encourage better engagement with diverse communities, anti-oppression training and the development and application of a content policy that addresses and prevents the publication of racist and sexist material.”

The Sun offered a tepid apology to Chow but said it disagrees with the CCNC’s view of the cartoon.

“Like most editorial cartoonists, Mr. Donato highlights and exaggerates the physical characteristics of his subjects, regardless of their race or ethnicity,” the Sun wrote. “Again, there was no intention on his part or that of the Sun to draw attention to Ms. Chow’s race or ethnicity.”

The Sun went on:

“The Toronto Sun very much regrets that CCNC Toronto Chapter has taken a different view of the drawing, but must reject the suggestion that the drawing embodies ‘underlying racism and xenophobia’. However, to the extent that it may be possible to interpret the drawing as highlighting racial or ethnic characteristics, the Sun regrets that implication and apologizes to Olivia Chow and anyone else offended by the cartoon.​”

“Focusing on the intention behind the illustration takes away from the significance of its impact and ultimate message,” the council wrote.

The council argued the cartoon “minimized” Chow’s experience and marginalized her. It wrote in part:

“The image of Olivia Chow in a Mao suit, with slanted eyes, evokes an existing racist caricature of Chinese Canadians, and minimizes a diverse population into a ‘character.’ This establishes that someone like Olivia Chow, who is a Chinese Canadian female, does not represent Canada and most certainly should not be the Mayor of Toronto. Olivia Chow has 20+ years in politics. The Toronto Sun has minimized her career as a politician to the memory of Jack Layton. They say it’s a ‘political reality’ that he is part of her appeal. But the illustration does not allow for those other parts to exist. The image clearly suggests that her overall success and legitimacy in politics depends on him.”

In that case, Donato drew a cartoon of Ontario Liberal Leader Kathleen Wynne’s glasses being broken on the ground next to bloody teeth. The cartoon was criticized for its violent nature.

iMediaEthics has written to the Sun and Chow for comment.

See tweets about the cartoon below.