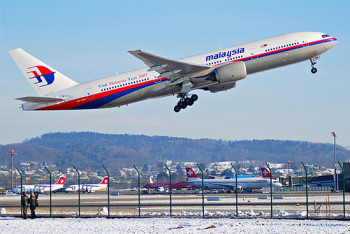 One of Malaysia Airlines' Boeing airplanes in 2007. (Aero Icarus via Wikipedia)

Readers criticized Russia Beyond the Headlines over its coverage of the crash of Malaysian Airlines flight 17, Lara McCoy Roslof wrote.

Russia Beyond the Headlines describes itself as a print and online news outlet reporting on “culture, politics, business, science, and public life in Russia.” It is “sponsored by” the Russian government’s newspaper Rossiyskaya Gazeta.

Roslof, the executive editor for the Western Hemisphere for Russia Beyond the Headlines, used a column to respond to readers’ concerns and complaints that the site failed to properly cover the crash.

Ultimately, Roslof acknowledged the site should have immediately covered the crash better. She also added, “we offer our deepest sympathies to the families and loved ones of the victims and call for a complete investigation into the events that led up to the tragedy.”

She added to iMediaEthics, “The purpose of the column was to let our readers know that we were caught off guard by the tragedy, but we were aware of our missteps and were trying our best to provide them with information and analysis.”

Readers also questioned why Russia Beyond the Headlines was publishing stories on other news like a Russian diamond manufacturer, a Moscow metro crash and a new budget airline but not much news about the crash.

“The problems RBTH faced covering the MH-17 crash were not that we failed to cover the tragedy, but in how we covered it,” Roslof argued to iMediaEthics.

Russia Beyond the Headlines accused of insensitivity

Readers also complained that the site was insensitive because it was promoting on social media a story about a new airline when the plane crash was dominating news.

Russia Beyond the Headlines schedules its social media stories in advance of the story being automatically posted, Roslof deflected.

Given that more than 150 people on the plane were Dutch, at least one Facebook commenter called out Russia Beyond the Headlines for being insensitive to the Dutch victims.

The commenter asked why the article wasn’t titled “We’re all Dutch.”

“I don’t want to be rude, but since this was a combined flight with KLM Malaysian Airline from Amsterdam” and “154 of my fellow Dutch countrymen died on that plane, shouldn’t it say … we are all Dutch?” the commenter wrote.

Russia Beyond the Headlines responded that it added an editor’s note to the article to reflect the death count by country.

Roslof penned her column in the style of a public editor, she told iMediaEthics.

“We do not have an official public editor at RBTH, so occasionally I try to step outside my role as executive editor and look at our coverage with a critical eye – particularly in cases where we have received a large number of criticisms and comments from readers,” she wrote.

She said she strives “to hold our reporters and editors to the highest standards of journalism and criticize our coverage when we have failed in this respect.”

Russia Behind the Headlines has now published more than a dozen articles about the plane crash.