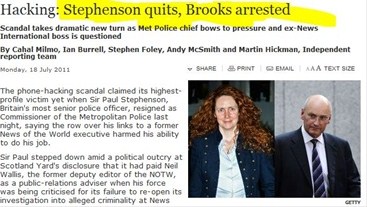 Rebekah Brooks, who resigned as News International’s CEO Friday and is a former News of the World editor, was arrested Sunday morning, The Guardian reported.  According to The Guardian, “an arrest by appointment on a Sunday by police is unusual.”

The police reportedly stated that her arrest was “in connection with allegations of corruptions and phone hacking.”

Brooks’ spokesperson reportedly told the BBC that the police informed her July 15 of an impending arrest following her resignation.  Brooks and both Rupert and James Murdoch are supposed to answer questions in Parliament July 19;  however, Brooks’ spokesperson commented that her arrest today “would make her appearance at the committee ‘pretty tricky.'”

The head of the Metropolitan police resigned yesterday as well, The Guardian reported. Sir Paul Stephenson’s resignation letter (See here) states that he is quitting because “of the ongoing speculation and accusations” suggesting the Metropolitan police and News International were “too close,” News Corp.-owned newspaper the Wall Street Journal reported.

He addressed his “relationship with Neil Wallis,” a former editor for News of the World, and a former adviser for “the police on public relations.”

Wallis “last week was arrested in connection with the criminal investigation” into News International, the Wall Street Journal reported.

Stephenson explained that he has known Wallis for five years and didn’t know of the 2006 phone hacking investigation or its faults when he met Wallis. He stated that he “played no role in the letting or management” of the police’s 2009-2010 contract with Willis.

The police are also looking into James Murdoch’s role in the phone hacking scandal, according to the Telegraph. Murdoch paid “between £800,000 and £1 million” in what is being called a cover-up.  The payments were made to the Professional Footballers Association’s Gordon Taylor and publicist Max Clifford, who reportedly had evidence of phone hacking in 2009.

Jude Law Claims Phone was Hacked in the U.S.

As iMediaEthics previously reported, Jude Law is suing two Murdoch-owned newspapers, the Sun and the News of the World, for phone hacking.

According to the Telegraph, Law is claiming his and his assistant’s phones were hacked when they were in New York in 2003.  If the allegations are proven true, News International could “be prosecuted in the United States” since their “telephones were operating on American networks.”

David and Victoria Beckham, as well as Paul McCartney’s “press aides” are also looking into the possibility their phones may have been hacked, according to the Telegraph.