Rebutting Jared Diamond's savage portrait: What tribal societies can really tell us about justice and liberty 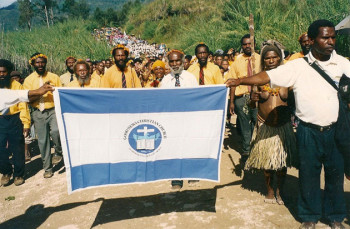 Handa Moses Akol (white beard & shirt with necktie in the middle) marching a "holy march" in 2003 with Ps. Henep Soap Lungil (in white shirt, on right) - two former enemies walking together united in the "holy march" leading their Christian flock at Punim near Nipa. As far as the eye could see, Christians are marching behind the banner. (Photo: MJ Kuwimb)

How do tribal communities in developing countries without functioning police, judges, law courts and prisons ensure social stability?  This question is of perennial interest to anyone familiar with tribal societies.  It is difficult for those of us familiar with such state institutions of law enforcement to imagine how people in tribal environments create order, particularly in dense populations like that of the New Guinea Highlands which also prizes individual political autonomy.

The popular image – traceable to Renaissance times, when Europeans first encountered tribal peoples – is of savages condemned to disorderly, even anarchic lives of constant violence and frequent bloodletting.  A recent example of this image is portrayed and promulgated by Jared Diamond in “Vengeance Is Ours: What can tribal societies tell us about our need to get even?” published in the The New Yorker, April 21, 2008.