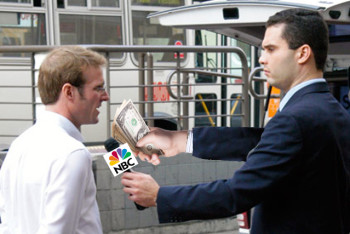 NBC News is paying Reeva Steenkamp’s family “a very modest licensing fee,” the Washington Post’s Paul Farhi reported.  Steenkamp was killed last year by her boyfriend Oscar Pistorius, aka “Blade Runner.” Pistorius says he shot Steenkamp, a model, by accident as he thought she was an intruder, but he is currently being tried for her murder.

Licensing fees are commonly seen as ways to get around overt checkbook journalism — or paying sources for interviews, iMediaEthics notes. Instead of a straight cash for chat swap, news outlets pay licensing fees to use material in the interviews.

Last year, Steenkamp’s mother told reporters that the family had to sue Pistorius for money because Reeva Steenkamp helped support them. Reeva Steenkamp’s uncle Michael Steenkamp told the AFP that she “did help her parents financially, that is true.”

The Post’s Farhi reported that an NBC News subsidiary paid the fee for “materials,” according to vague comments he received from NBC News spokesperson Ali Zelenko.  In a statement to Hollywood Reporter that appears to be similar to one cited by Farhi, Zelenko said:

“Peacock Productions UK is making three separate documentaries about the Steenkamp family for various outside clients. As is normal, they have paid a very modest licensing fee for materials they will access.”

iMediaEthics has written to Zelenko asking how much NBC News paid for the licensing fee, if it came with any ties, and when it was made. We also asked when Steenkamp’s mother was booked to appear on the Today show. We’ll update with any response.

Last year, Farhi reported that NBC News “licensed” a video for interviews with sky divers who jumped out of crashing planes in Wisconsin. One of the skydivers told him that NBC got “the exclusive right” to TV interviews along with the $100,000 payment for the video.

On the other hand, ABC News told the Hollywood Reporter it decided against paying the Steenkamp family for any interview.  ABC News senior public relations director Heather Riley is quoted as saying, “We requested an interview with the family, they requested payment and we politely turned that opportunity down.”

Riley confirmed this to iMediaEthics by e-mail, citing ABC News’ 2011 policy against paying for interviews. She said she couldn’t provide any additional information, such as how much money the family requested for an interview.