Reporter made Olympic Skier Cry, Was it Unethical? NBC Takes Heat For Sochi 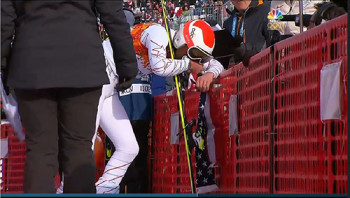 A screenshot from the interview of Bode Miller. (Credit: NBC, screen capture)

NBC’s Christin Cooper’s interview of skier Bode Miller has generated controversy. Many viewers were angry about Cooper’s asking Miller about his late brother, which prompted him to break down in tears.

Miller is part of the U.S. Alpine Ski Team competing at the Olympics in Sochi.  His brother Chelone “Chilly” Miller, a professional snowboarder, died in April 2013 after “an apparent seizure,” ABC News reported at the time.  Cooper is a former Olympian skier now working as a reporter for NBC, Fox Sports reported.

Video of the interview is on the NBC Olympics website.

Viewers criticized the interview because they felt Cooper was insensitive and perhaps, even cynical, for pressing Miller too hard.

NBC defended the interview, according to a statement published in a New YorkTimes sports news article. NBC argued that the questions were “a necessary part of the story.” Its statement reads:

“Our intent was to convey the emotion that Bode Miller was feeling after winning his bronze medal. We understand how some viewers thought the line of questioning went too far, but it was our judgment that his answers were a necessary part of the story. We’re gratified that Bode has been publicly supportive of Christin Cooper and the overall interview.”

The New York Times article, by Richard Sandomir, argued that the interview went “too far” but acknowledged it “was not out of bounds” to ask Miller about his brother.

Similarly, Christian Science Monitor‘s Mark Sappenfield wrote in a news story that NBC crossed “a very fine line.”  Sappenfield suggested that Cooper could have focused on Miller’s performance and not his family. He suggested:

“The problem is that he clearly wasn’t in any fit emotional state to share that with Cooper, and yet she plowed on. Other members of the press, for example, would likely have asked Miller about his brother, too – would have wanted that quote. But they would have shifted gears because they were also interested in the actual race itself – where did he make his mistakes, how did the snow conditions affect him, how did he assess his chances in the giant slalom ahead?”

In contrast, The Toronto Star wrote in defense of Cooper’s interview, noting that Miller knew he would be interviewed and Cooper’s questions were fair.

“Christin Cooper’s interview does not come anywhere close to crossing an ethical line,” The Toronto Star wrote. “At no point does she hector Bode Miller. At no point does he definitively dissuade her from her line of questioning.”

iMediaEthics must note that Cooper only asked three specific questions referencing or suggesting Miller’s brother or feelings. And, the most mitigating fact for Cooper is that Miller himself brought his brother up, setting up related questions as fair game.

In response to the exploion of criticism levied at Cooper and NBC, Miller defended Cooper, saying that he felt badly about how people were slamming Cooper’s treatment of him.

In an interview with NBC’s the Today Show, he explained that she wasn’t responsible for him crying. He offered the rather weak excuse that she wouldn’t have anticipated “what my reaction was going to be.”

“I don’t blame her at all,” he said in the interview.

“I feel terrible that she’s taking the heat for that because it really was just a heat-of-the-moment kind of circumstance,” Miller continued. “I don’t think there was any harm intended.”

I appreciate everyone sticking up for me. Please be gentle w christin cooper, it was crazy emotional and not all her fault. #heatofthemoment

My emotions were very raw, she asked the questions that every interviewer would have, pushing is part of it, she wasnt trying to cause pain. — Bode Miller (@MillerBode) February 17, 2014

With the power of NBC’s exclusive at the games and more sponsorship dollars in the offing, one has to wonder about all of this pointed and repeated defense of Cooper and whether Miller was asked by NBC to do a good turn and stick up for her. We have written to NBC for comment. We asked the U.S. Ski and Snowboard Association, of which Miller is part, if Miller was asked to respond to critics of the interview and if he had any further comments about the interview. Press officer Doug Haney told iMediaEthics by e-mail that Miller’s “feelings on it have been accurately reported.”