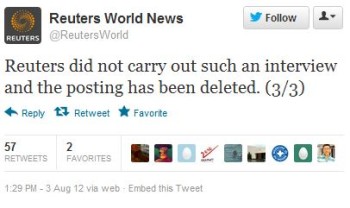 Fake stories were posted to Reuters‘ blogs August 3 after the “blogging platform” was hacked, the Wall Street Journal reported and  Reuters confirmed to iMediaEthics.

Reuters tweeted about the hack noting that the fake interview “was illegally posted on a Reuters journalist’s blog page on reuters.com,” and also explained in a statement that it was “a target of a hack.”  The statement added:

“Our blogging platform was compromised and fabricated blog posts were falsely attributed to several Reuters journalists.”

The Herald Sun posted a screenshot of the fake interview, which carried Reuters’ Jeffrey Goldfarb’s name.  Goldfarb’s “about” page on his Reuters blog identifies his blog as covering “investment banking and the financial sector.”

The New York Times added that blog Moon of Alabama had a screenshot of a second fake story posted to Reuters’ site.  That story carried the dateline of August 2 and the headline “Rebel Resistance Collapses in Key Suburbs.”  The Times noted that the fake “Rebel” story had “errors of grammar of syntax.”

NBC News noted that “It wasn’t immediately clear how long the fake news story was on the Reuters.com website or whether any Reuters subscribers picked up the story and ran it in their publications.”  In its August 3 report on the hack, Reuters reported that it didn’t know who hacked the site yet and that its “blogging platform was taken offline on Friday while the company works to address the problem.”

We wrote to Reuters seeking specifics like how many stories were removed, how Reuters learned about the hack and if Reuters has found out who hacked the site. A Reuters spokesperson provided us with a link to Reuters’ report on the hack and a copy of its statement:  “Reuters.com was a target of a hack on Friday. Our blogging platform was compromised and fabricated blog posts were falsely attributed to several Reuters journalists. We are working to address the problem.”