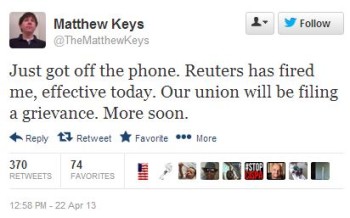 Matthew Keys was fired from Reuters just a month after he was accused of helping Anonymous hack the Los Angeles Times’ website.

Keys, who was suspended after the indictment was announced, revealed that he was fired in an April 22 tweet. In that tweet, Keys said his “union will be filing a grievance.”

As iMediaEthics wrote in mid-March, Keys is accused of giving hackers Anonymous log-in information for a Tribune Company server, back when Keys worked for Tribune Company’s KTXL Fox 40 in 2010. He later became Reuters’ deputy social media editor, but was suspended because of the U.S. Justice Department’s indictment. If convicted, Keys would face jail time and huge fines. Keys’s attorney, Tor Ekeland, told iMediaEthics at the time that Keys is “innocent” and the accusations against him are “baseless” and Keys has pleaded not guilty.

But was his recent firing related to the charges? Keys, who is challenging the firing with the support of the Newspaper Guild, states it wasn’t.

In an interview with Politico, Keys said that Reuters “did not mention the indictment during the phone call” firing him but rather for his tweeting.  “Now, one has to wonder if the two are connected, but I can’t tell you that it is connected. I can only say that I assume it is, that I assume they were looking for an out,” Keys told Politico.

But, the official word and his “understanding” of his firing is that it relates to his tweets on the Boston Marathon bombings. Keys told Politico:

““It’s my understanding that Reuters did not agree with some of the coverage I did on my own during the Boston Marathon events from last week…We are in agreement, the union and myself, that I have done nothing wrong, that the basis for the termination is incorrect and doesn’t hold any water.”

The Newspaper Guild posted a statement on its website that it plans to “vigorously defend” Keys because it thinks his firing was “without just and sufficient cause.”

In tweets and a blogpost April 22, Keys offered more information on his firing.

Reuters said the basis of my termination was because I violated my final written warning. You can read it here – bit.ly/11eWmRu

Li calls out Keys for making a “parody Twitter account @PendingLarry that mocked the chief executive of Google Inc.” That account conflicted with Reuters’ Social Media Policy, Li wrote, noting Reuters “does not endorse or condone the use of parody accounts” and that Keys shouldn’t have run the account anonymously at first.

“Reuters journalists are never to misrepresent themselves” and “the fake account embarrassed our News reporting team and has possibly damaged our relationship with a company that we have covered aggressively,” Li wrote to Keys.  In closing, Keys is warned that if he doesn’t show “immediate improvement in your communications with managers and more discretion in your social media practices” he could be fired.

What Reuters Says about Firing, according to Keys

Blogging at length, Keys listed “several reasons” he says he was given for his firing. Keys said he got in trouble for identifying himself as working for Reuters on Twitter while he was suspended.

But, what should he have done, he asked.  Keys argued it was a “Catch 22” because had he not listed himself as with Reuters, he could have gotten in trouble.

“That would have violated the company’s Twitter guidelines, and would have also violated the October warning that said I failed to identify myself as a Reuters journalist when on Twitter,” he blogged.  “Instead, I left the bio alone, which the company says created a perception that my work was associated with the company — even when Reuters has released statements and news reports to the contrary.”

And, Keys specifically got in trouble for his tweets about the Boston Marathon bombings, he said.  Keys blogged that Reuters didn’t like that he tweeted information from emergency scanners, especially since the Boston Police Department asked people not to do so. But, Keys said he didn’t know about that request when he was tweeting from the scanners and that when he did find out, he “erred on the side of caution and stopped tweeting information heard over the scanner.”

Keys added that Reuters called some of his marathon bombings tweets “erroneous,” but he defended them as “sourced to police and/or dispatch audio.” According to Keys, he asked Reuters to provide evidence of these errors, but he didn’t get any.  Further, Keys said he tweeted out any necessary corrections in accordance with Reuters’ Twitter guidelines.

iMediaEthics has written to Reuters asking:

We’ll update with any response.