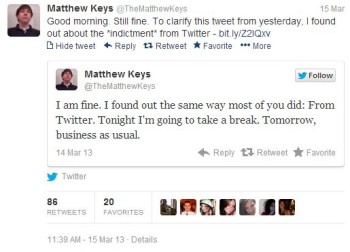 Reuters deputy social media editor Matthew Keys was charged March 14 “for allegedly conspiring with members of the hacker group ‘Anonymous’ to hack into and alter a Tribune Company website” — charges that, if proven, could lead to prison-time and hundreds of thousands of dollars in fines, according to a press release from the U.S. Department of Justice.

Using the information provided by Keys, an Anonymous hacker allegedly hacked a Los Angeles Times page to make it say that “a hacker called ‘Chippy 1337’ was about to be ‘elected head of the [U.S.] Senate,” according to Mashable. That hack happened a couple of months after Keys was fired from KTXL.

But was it a “prank” or “an online security breach”? That question was raised in a report by the Associated Press.  And the Huffington Post reported that Keys’ attorney Jay Leiderman described Keys’ role as “an undercover-type, investigative journalism thing, and I know undercover — I’m using that term loosely.”

Leiderman added that Keys is “being prosecuted for that, for going to get the story.”

Another lawyer for Keys, Tor Ekeland, suggested there’s a “draconian approach to computer crime laws” and argued that Keys was “merely a reporter doing a story on Anonymous,” according to the Los Angeles Times. When asked for comment about the case, Ekeland told iMediaEthics by email:”We don’t have much more to say for the moment than what we’ve already said.”

Keys had written about talking with Anonymous members in online chats before, many media outlets have noted.  And, Gizmodo added that “the absolute strangest part” about this is that hacker Sabu publicly tweeted about how Keys gave the information over. That March 22, 2011 tweet  read:

In Reuters’ own report on the indictment, it quoted a company spokesperson saying:

“Any legal violations, or failures to comply with the company’s own strict set of principles and standards, can result in disciplinary action. We would also observe the indictment alleges the conduct occurred in December 2010; Mr. Keys joined Reuters in 2012.”

Reuters added that an unnamed “Thomson Reuters employee at the New York office where Keys worked said that his work station was being dismantled and that his security pass had been deactivated.” In light of the indictment, Keys was “suspended with pay” from Reuters, according to Huffington Post. Keys, who has re-tweeted stories about the charges against him, noted in a tweet that he “found out about the *indictment* from Twitter.”

iMediaEthics has written to Reuters asking

We’ll update with any response.