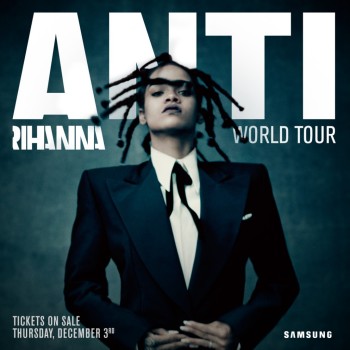 Yahoo News published an article about Rihanna’s new album Anti, which hasn’t been released yet.

The article, “Rihanna ‘Anti’ New Album: Complete Lyrics, Tracklist, Download and Streaming Options,” is a draft that included many notes to insert information about the album when available.

Yahoo News has since deleted the article, which carried Mic’s byline. The link to the article on Yahoo now re-directs to the homepage.

See below a screenshot of the article before it was removed from Yahoo’s website. The article read in part: “Barbadian powerhouse pop star Rihanna dropped her long-awaited album on [FRIDAY], featuring some of the hottest names in the music industry, including [FEATURED ARTISTS].” 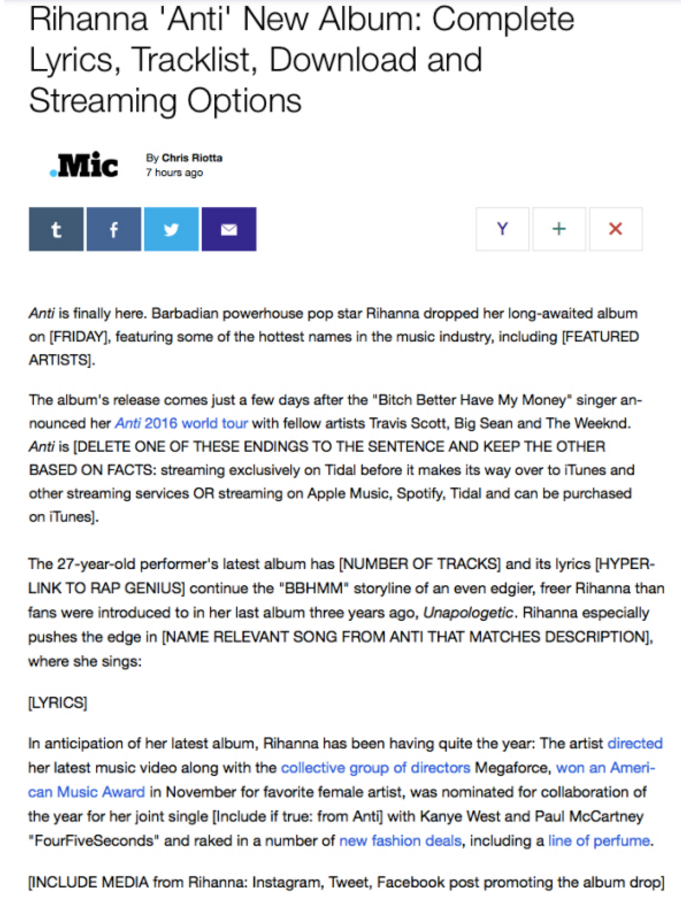 “Anti is [DELETE ONE OF THESE ENDINGS TO THE SENTENCE AND KEEP THE OTHER BASED ON FACTS: streaming exclusively on Tidal before it makes it way over to iTunes and other streaming services OR streaming on Apple Music, Spotify, Tidal and can be purchased on iTunes],” the article said. “The 27-year-old performer’s latest album has [NUMBER OF TRACKS] and its lyrics [HYPER-LINK TO RAP GENIUS] continue the ‘BBHMM’ storyline of an even edgier, freer Rihanna than fans were introduced to her last album three years ago, Unapologetic. Rihanna especially pushes the edge in [NAME RELEVANT SONG FROM ANTI THAT MATCHES DESCRIPTION], where she sings: [LYRICS].”

Vice‘s i-d website noted that the Mic article was written by Chris Riotta, who tweeted a picture of Rihanna with a shrugging emoticon and the text “S**t happens.”

iMediaEthics has written to Mic and Yahoo News for comment.

UPDATE: 11/28/2015 8:26 PM EST Yahoo News PR manager Megan Rose told iMediaEthics: “Some stories on Yahoo’s homepage are selected by an algorithm, including this MIC post, which was flagged for being in violation of Yahoo’s editorial policy and was removed within a short time.”

It's a common practice to help get out a short article to help fans find new music even faster! Glad you all found my brackets funny tho ???