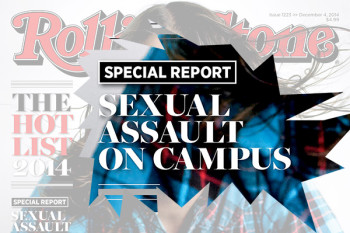 With Rolling Stone currently fighting off libel lawsuits over its discredited reporting on rape in the 2014 article, “A Rape on Campus,” you’d think they would be more cautious with reporting on rape. But, the magazine waded into the territory with its recent article on domestic violence and the just-ended rape trial against NBA player Derrick Rose. An ex-girlfriend sued Rose and two of his friends in civil court for rape, which he denies. Yesterday, Rose and his friends were cleared of the lawsuit.

The NBA declined to comment to iMediaEthics about the article and its unpublishing.

The NBA had complained about the article, according to Politico. Archive.org has a copy of the article before deletion. Politico explains:

“After the piece was published, an NBA representative contacted RollingStone.com sports editor Jason Diamond to dispute a number of assertions in the piece, a Rolling Stone source told POLITICO.”

On Oct. 17, Rolling Stone published a note to readers about the “substantial flaws” in the article.

“On Wednesday, October 12th, RollingStone.com published an article about the Derrick Rose civil rape trial and the NBA’s handling of it. After publication, it became apparent that the story had substantial flaws.

“We made the editorial decision to take down the article on Friday, October 14th. The decision to remove the article from the site was ours alone, and we apologize to anyone that may have been affected.”

Deadspin noted “the piece contains a number of arguments to which the league might have objected. Besides comparing criminal convictions to an ongoing civil trial, Shah argues that the league should have ordered a mental health evaluation of Rose…She also asserts that the NBA did not investigate Collison’s case; though an investigation was not publicly announced, the league almost certainly conducted at least a cursory one.”

iMediaEthics has written to the Rolling Stone and its reporter Shah for comment.