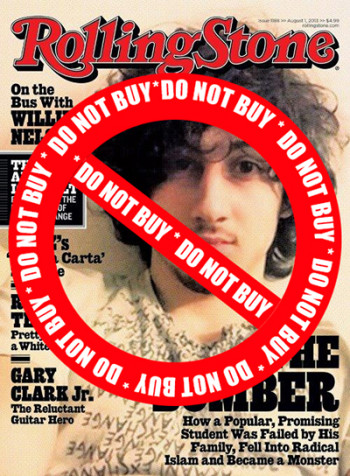 Sales doubled!?! Sounds exciting, right?  Except the paltry earnings from a doubling in newstand sales is chump change when compared to the loss of even one page of advertising, the real threat in the boycott.

Members of the media seem to be gleefully gloating that the controversy that surrounded the recent Rolling Stone cover featuring accused Boston Marathon bomber Dzhokhar Tsarnaev increased sales of the magazine and that the cries from disgruntled readers for a boycott were an utter waste of time.

These claims of a “victory” are based on the newsstand sales of the August issue. As the Christian Science Monitor (CSM) glibly put it: “The lesson, in short, is that publicity of almost any kind pays.”

It pays because magazines are flying off the shelves? Really? Let’s do a special investigative technique that we like to call “math.”

According to Adweek, the Tsarnaev issue sold 13,232 copies in a two-week period, producing sales rising “102 percent over average per-issue sales for the past year.” Based on that math, Rolling Stone sells about 6,550 copies so the Tsarnaev issue sold an extra 6,681 copies (102%), making the total of 13,231 (close enough) copies.

The extra 6,681 copies sold for $4.99 made a grand total of $33,338 gross retail. After you factor in retail and wholesaler/distributor’s cut of the cover price, Rolling Stone would be lucky to get half of that — about $15,000. (All of this is besides the fact that retail sales only make up 5% of Rolling Stone’s approximately 125,000 monthly circulation — so who cares anyway.)

Pulling back the curtain on the claim that magazines are “flying off the shelves” and “newsstand sales surge,” we are talking about Rolling Stone grossing an extra $15,000. Not very exciting, since the advertising rate card says one page of advertising in Rolling Stone sells for $201,510 gross and $171,284 net,

If one advertiser pulls one ad from Rolling Stone, let alone ten, this is where Rolling Stone will take the financial hit — not at the newsstand. And if several advertisers walk away, it is potentially a loss of millions of dollars in ad revenue.

But not a word about that from Adweek, which declared “the controversy doesn’t seem to have hurt newsstand sales.” This is an odd statement considering that Adweek predicted the bump in retail sales when the controversy first broke in mid-July.

In an earlier article, Adweek did describe the possible backlash from advertisers that Rolling Stone was facing.

“A leading CPG marketer at a major media agency ‘had issues with the cover,’ said a rep. ‘[They were] not pleased at all.” Another buyer who has been hearing from clients described the reaction this way: “The general sentiment was that it’s been in poor taste. No one’s been supportive.’ Advertisers expressed surprise they didn’t get a heads-up before the magazine hit newsstands—standard practice when an issue contains potentially controversial content. That prompted some to contact their agencies, wondering whether they should continue doing business with the Wenner Media publication.”

Since the money game in magazines is ad sales, why is selling an extra 6,681 magazines touted as success, instead of considering a looming potential loss of millions in advertising dollars?

Christian Science Monitor barely touches on this issue. It is buried in the story when it really should be the lede.

“While magazine sales may be up for Rolling Stone, its August issue hit a sour note with advertisers. Several companies with ads in the controversial issue, including Kraft and Proctor & Gamble, were unhappy that they had received no advance warning about the cover photo, notes a recent issue of Adweek. The firms are questioning whether to place future ads with Rolling Stone, company representatives told Adweek on condition of anonymity.”

iMediaEthics has emailed and called Kraft and Procter & Gamble to fact check Adweek‘s claims that they weren’t notified of the cover and that they may stop advertising with Rolling Stone.

We’ve asked both companies if they will be placing any more ads during 2013 in Rolling Stone. Kraft representatives told iMediaEthics by email that will not comment, explaining that they  “for competitive reasons, do not discuss future advertising plans.” Kraft also stated that they “do not comment on speculation or rumors.” when asked about the the anonyous source who reported they were unhappy with Rolling Stone.

“As a matter of practice, we don’t comment on our media plans or relationships with our media partners so I don’t think we’ll be able to help you much with your story. Thanks for reaching out to us though.”

Josh Voorhees wrote for Slate that:

“Of course, as much attention as the promised boycotts may have gotten, they never really had a chance of doing real damage to the magazine because newsstand sales make up only a little more than 5 percent of Rolling Stone‘s roughly 1.5 million circulation.”

(The Slate article has an error: He misattributes the Adweek article to Ad Age. We are asking Slate about the error.)

More importantly Voorhees’ misses that the threat to Rolling Stone is not the people reading the magazine but the advertisers. After all, another name for boycotter is the “advertiser’s customer.”

And considering that copies of the controversial cover are being sold in groups of 25 on eBay, the increase in sales is hardly an endorsement of the cover by readers but simply a byproduct of American capitalism. Scarcity creates value as evidenced by one magazine selling for $500.

Why the media snow job?

There is a misconception that the reader/consumer of news is the customer for news media. The media at large is happy to allow this misconception to continue.

Advertisers are the news media’s true customer. A customer is defined as “one that purchases a commodity or service.”  Yes, readers/viewers are customers technically but as more news is consumed for “free” and news media runs into the ethically bankrupt territory of native advertising, the consumer of news becomes less and less important.

The truth is consumers are really just part of the commodity that is sold to news media’s main customer – the advertiser.

But media consumers are the advertiser’s customers. So it helps all media to try and sell the idea that customer outrage equals increased sales.

Paul Levinson, author of “New New Media” claimed in Christian Science Monitor that Rolling Stone “can afford to let advertisers be momentarily unhappy”.  He goes on to say, “I would tell them, ‘Go ahead and advertise in a magazine that has no impact and makes no contribution to a deeper understanding of the news.”

Considering that Rolling Stone was described as “a gasping dinosaur” less than a year ago by International Business Times, it shouldn’t be so quick to dismiss the importance of fleeing advertisers. (Not to mention the magazine has had declining ad prices in recent years and only sold 25 1/3 pages of advertisements in the “Bomber” issue.)

The question Levinson needs to ask himself is ‘Does a magazine with no advertisers make an impact?’ Unlike the question of the tree falling in the woods this one might be easier to answer.

iMediaEthics has reached out to Rolling Stone to ask if advertisers have pulled ads or requested to see issues before placing an ad. We’ll update with any response.