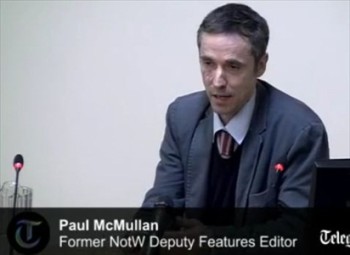 The Leveson Inquiry, created to address the “culture, practice and ethics of the press” in light of the UK phone hacking scandal, has seen a number of high-profile celebrities and public figures comment on the UK press and how it has affected their lives.  See all our stories on the inquiry here.  The inquiry, which started Nov. 14, and has hosted testimony from actors like Hugh Grant and Sienna Miller, lawyers, and family members of crime victims.

The past week’s testimony has included Guardian journalist Nick Davies on journalism standards, journalism ethics and press regulation; former Daily Star journalist Richard Peppiatt on his fabrications; former News of the World features editor Paul McMullan on hacking, surveillance, and privacy; singer Charlotte Church on the public interest and a promise of positive coverage from News Corp; libeled UK man Christopher Jefferies on being “vilified” by the press; and more.  See below a round-up of some of the revelations and accusations made at the Inquiry.

According to the Guardian’s live blog, Associated Newspapers told the Leveson Inquiry that it won’t file “disciplinary proceedings against” an employee to reveal evidence to the Leveson Inquiry, unless the revelations are “so serious that it would justify dismissal for gross misconduct” or if the person misleads the inquiry.

Associated Newspapers owns the Daily Mail, among other UK newspapers.

Guardian reporter Nick Davies told the Leveson Inquiry Nov. 29 that press self-regulation won’t work.  “I don’t think this is an industry that is interested in or capable of self-regulation,” he is quoted as saying.

Davies slammed the PCC‘s investigation into phone hacking in 2009, calling it an “awful piece of work.” He said the PCC caters to news organizations instead of the public.  Moving forward, he called for a way to address libel complaints “by arbitration without recourse to the courts” and for defining what “the public interest” really is, the Guardian’s live blog reported.

Davies also indicated that “there is a culture of bullying in some Fleet Street papers,” according to the Guardian’s live blog.

Davies also commented on reporting on privacy issues, noting that the Guardian declined to report a story on hacking because it would “rebreach the privacy that was breached in the first place.” In that case, he said the “raw material for that story” was comprised of private text messages.

When it came to the case of the Milly Dowler hacking, he noted that the Guardian “sent a detailed report through Surrey police” to the family so that the reporting wouldn’t harm the family as much. Dowler is the murdered teenager whose phone News of the World hacked.

“We did what we could to soften the impact by sending that detailed warning,” Davies is quoted as saying, explaining that the story was “so important” it had to be “in to the public domain,” the Guardian’s live blog reported.

Concerning that hacking, Davies said private investigator Glenn Mulcaire was the “facilitator” in hacking the phone, but the News of the World journalists “deleted the voicemail messages.” That was the standard procedure, according to Davies.

Mulcaire “does not actually, on the whole, do the listening to the messages himself. Most of that is done by the journalists themselves.”

Richard Peppiatt, a freelance reporter for the Mail on Sunday in 2008-2009 and a freelancer for the Daily Star until earlier this year, told the Leveson Inquiry Nov. 29 that he wasn’t instructed on the Press Complaints Commission’s standards when working at the Daily Star.

We wrote in March when Peppiatt leaked his resignation letter to the Guardian.  In the letter, he claimed the Star had “skewed news values” and admitted to fabricating stories for the newspaper.

“There are implicit considerations – you don’t go barging into hospitals – but certainly there was never a discussion that I remember on ‘how should we run this story in relation to the PCC code?'” he said, according to the Guardian’s live blog.

Further, Peppiatt charged that the Star “is not a truth-seeking enterprise” and that it’s not alone as a tabloid in being “ideologically-driven” and “impact-driven.”  Peppiatt claimed that The Star, and its sister publications also served as free advertising for their parent company’s entertainment businesses, like the Big Brother TV program.

According to the Guardian, Peppiatt listed a series of phony headlines that the Star printed alleging stories such as “Chile mine to open as theme park” and “Brittany Murphy killed by swine flu.”

We wrote in October when the Guardian and Tabloid-Watch called out the Star’s report about the purported Chilean mine theme park.  Tabloid-Watch suggested the fake article was inspired by or sourced to a website called The Spoof.

Peppiatt also apologized for the Star’s story on Kevin McGee’s death and Susan Boyle. Concerning McGee’s story, Peppiatt said he was “ashamed” for the story and indicated that “there was a [feeling]” that the newspaper could write whatever about McGee since “you can’t libel the dead.”

He said that he harassed Boyle and even made a “mock proposal” to her.

Further, Peppiatt commented on stories he made up or ran even though he knew they weren’t true.

The Independent noted that the Daily Star issued a statement rebutting some of Peppiatt’s claims.

The Star suggested Peppiatt is a disgruntled former employee and that he was responsible for his own fabrications.  For example, the Star said “he approached and offered” the Star a fabricated report on Kelly Brook that he “vouched for its accuracy.”  The Star suggested it was unaware of fabrication with its comment that: “Since he wrote his email we have discovered that he was privately warned very recently by senior reporters on the paper after suggesting he would make up quotes.”

, Former Features Editor at News of the World

Paul McMullen also spoke to the Leveson Inquiry Nov. 29 in a sensational testimony.  He said that he “spent time hiding in vans, having car chases and sneaking quarry in and out of hotels to stop rivals getting a whiff of the paper’s story,” according to the Guardian’s live blog.

McMullan indicated that the public wanted the invasive stories, such as the Max Mosley report, as evidenced by its circulation.

“If the public found the targets of our stories distasteful they would not have bought it. The inverse is true.  Of interest to the public is what they put their hand in their pocket and buy,” he is quoted as saying.

McMullan said private investigators were over-used at News of the World and defended phone hacking.  “I think phone hacking is a perfectly acceptable tool if all we were doing to trying to get to the truth.”  Further, he said “he believes that the News of the World was one of the “least bad offenders” among newspapers in relation to phone hacking,” according to the Guardian’s live blog.

He didn’t admit to e-mail hacking at News of the World.

McMullan defended the hacking of Milly Dowler’s phone because he said “We were doing our best to find the little girl. The police are utterly incompetent and should be ashamed that the killer was allowed to carry on.”

At one point, Leveson interjected to warn McMullan “that he does not have to incriminate himself.” McMullan did implicate editors at News of the World saying that they knew about hacking. McMullan is quoted as saying:

“We did all these things for the editors, Rebekah Brooks and Andy Coulson…They’re the scum of journalism for trying to drop me and my colleagues in it.”

McMullan indicated that News International had a “cozy” relationship with the government and that “in recent months” he put a “surveillance van outside Rebekah Brooks’s house…in the hope of getting a story linking her to Cameron.”

McMullan commented that “I absolutely loved giving chase to celebrities. Before Diana died it was such good fun. How many jobs can you have car chases in? It was great.”

McMullan said he doesn’t think people should have privacy. “Privacy is the space bad people need to do bad things in. Privacy is evil; it brings out the worst qualities in people.  Privacy is for paedos; fundamentally nobody else needs it,” he is quoted as saying.

McMullen said there aren’t “many” stories that he regrets, but one is the case of Jennifer Elliott. According to the Guardian, Elliott “became a drug user and started begging following the death of her father,” actor Denholm Elliott.

“I went too far on that story. Someone crying out for help, not crying out for a News of the World reporter. I then took her back to her flat and took a load of pictures of her topless. Then she went on TV and described me as her boyfriend,” McMullan is quoted as saying.

As we have written, some of the UK press have been found guilty of libel and/or contempt of court in their reporting on the December 2010 murder of Joanna Yeates.  Specifically, eight news outlets paid Yeates’ landlord, Christopher Jefferies, libel damages after their reports on him.  He was initially questioned and later cleared.

Jefferies spoke at the Leveson Inquiry Nov. 28 about the press and claimed that he was “shamelessly vilified,” according to the BBC.  “It was clear that the tabloid press had decided that I was guilty of Miss Yeates’s murder and seemed determined to persuade the public of my guilt.  They embarked on a frenzied campaign to blacken my character by publishing a series of very serious allegations about me which were completely untrue.  Allegations which were a mixture of smear, innuendo and complete fiction.”

Singer Charlotte Church told the Leveson Inquiry that when she was 13, she was offered either a £100,000 fee or “a promise of future favourable coverage” in News Corp’s newspapers to sing at Rupert Murdoch’s wedding, the Independent reported.

Her management advised she take the positive coverage. However, she told the Leveson Inquiry that “her strategy failed and that the media mogul’s newspapers had since been ‘some of the worst offenders.'”

For example, she noted News of the World reported that “her father was having an affair and that her mother had attempted suicide,” stories which she told the inquiry had “no public interest.”

Another News Corp-owned newspaper, the Sun, “revealed she was pregnant for the first time before she had even told her family.”

The Independent listed some of Church’s “Examples of media intrusion and inaccuracy” such as “A clock on The Sun’s website counting down to her 16th birthday in a reference to the fact she was reaching the age of sexual consent.”

She called the media’s reports on her “utterly horrifying at times and devastating to those around me,” according to the Independent.

We wrote Dec. 1 about UK newspaper The People’s apology to Church for a Nov. 6 article wrongly claiming that she proposed to her boyfriend.