RTE: Our libel defense ‘Unlikely to Succeed Before Jury,’ Homophobic Remarks cost us 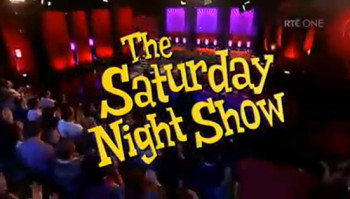 Irish broadcaster RTE paid €85,000 in a libel settlement over comments made in a Jan. 11 entertainment program, Saturday Night Show.

A guest, Rory O’Neill, “better known by his drag queen alter ego Pandora Panti Bliss,” had suggested on air that two journalists and an Irish institute were homophobic.

O’Neill stated journalists John Waters and Breda O’Brien, as well as the group The Iona Institute, were “really horrible and mean about gays” in their “opinion pieces for newspapers.”

The Iona Institute describes itself as promoting “the place of marriage and religion in society.” Only Waters and O’Brien were named specifically by O’Neill.

RTE, Ireland’s national broadcaster, received a total of six legal threats over the comments and in response decided to apologize and pay a libel settlement.

O’Neill himself received five legal threats, but told iMediaEthics by e-mail that he has no plans to apologize and defends his comments as “honestly held opinion.”

RTE’s Karen Fitzpatrick told iMediaEthics that RTE wasn’t aware of what O’Neill planned to say in advance of the broadcast or from a pre-broadcast interview.

As part of the remedy, RTE has since removed a clip of O’Neill’s comments from its website’s video player, RTE Player.

Interestingly, Irish television viewers were more upset about the apology from RTE than any accusations of homophobia, as judged by the number of complaints.

RTE received 1,432 complaints from viewers for the apology it made on air, Fitzpatrick told iMediaEthics, but only got 13 complaints about the Jan. 11 program featuring O’Neill. And, those 13 complaints were not over what he said, but rather the fact that RTE removed O’Neill’s comments from its website, she said.

Fitzpatrick told iMediaEthics by e-mail they won’t be reloading it on their site in the future: “Having accepted that the item could be deemed to be defamatory we will not be reinstating it online on the RTE Player.”

The issue for RTE, according to Fitzpatrick, was to remedy libelous comments, and not about censoring O’Neill.

“RTÉ has not engaged in censorship, but has rather fallen foul of Ireland’s defamation laws,” she wrote to iMediaEthics.

Fitzpatrick also said that they didn’t expect to win in court.

Viewers also complained to the Broadcasting Authority of Ireland about RTE’s apology and removal of the segment from its webssite.

The Broadcasting Authority of Ireland received more than 300 “correspondences” from viewers, Catherine Heaney of PR firm DHR, which represents the authority, told iMediaEthics.

The viewer responses aren’t considered complaints yet, she explained, because of the way the complaints process works.

Viewers must first complain to RTE before they can formally complain to the Broadcasting Authority.

Of the six people who sent legal threats to RTE over the comments, only two, journalists Breda O’Brien and John Waters, were specifically named on air.

O’Brien is a columnist for the Irish Times and is a “patron of the Iona Institute.”

Waters is also columnist for the Irish Times.

The other four are members of the Iona Institute, including its director, David Quinn.

In response, as we have said, RTE decided to settle and apologize on air.

RTE’s on-air apology was read by Brendan O’Connor, and is below in full:

“Now, on the Saturday night show two weeks ago comments were made by a guest suggesting the journalist and broadcaster John Waters, Breda O’Brien and some members of the Iona institute are homophobic. These are not the views of RTÉ and we would like to apologise for any upset or distress caused to the individuals named or identified. It is an important part of democratic debate that people must be able to hold dissenting views on controversial issues.”

This is the only apology that has been made, Fitzpatrick told iMediaEthics.

Fitzpatrick went into detail with iMediaEthics about why RTE settled the libel claims instead of fighting them in court.

She explained that they didn’t expect to win in court if they fought the defamation claims.

“A settlement was the most prudent course of action,” Fitzpatrick explained. Other options RTE considered included putting the people mentioned by O’Neill on air to respond to his comments or donating money “to a neutral charity.”

She continued, “However, based on the facts of what was broadcast, and having regard for broadcasting compliance issues, the seriousness of the legal complaints, and the decision by the complainants not to accept RTÉ’s proposed remedies, RTÉ decided that a settlement was the most prudent course of action.”

She noted that RTE is funded in part by the public. RTE is “funded by both commercial revenue and a Television License fee.”

“Senior counsel was consulted and confirmed that the legal position was far from clear. As a dual-funded public body, RTÉ should not knowingly progress to defend an action when it is advised, internally and externally, that such a defence is unlikely to succeed before a jury.”

Fitzpatrick added that RTE is continuing to cover debates related to homophobia.

O’Neill, who set the controversy off with his Jan. 11 comments, told iMediaEthics that, like the RTE, he has been threatened with legal action over his comments.

But O’Neill said he won’t apologize for his remarks and stands by them.

“I have indeed received legal threats,” O’Neill said to iMediaEthics by e-mail. “I got solicitor’s letters from five different people – two of whom I mentioned by name in the broadcast,” he wrote “and three others who are associated with the conservative Catholic organisation I mentioned. All five letters demand a public written apology, and threaten legal action should I not comply.”

iMediaEthics asked RTE if its settlement precluded any legal action against O’Neill over his comments but RTE’s Fitzpatrick said she “can’t comment on details around the settlement.” iMediaEthics is writing to the Iona Institute to ask if the RTE settlement is enough.

He still defended his comments that RTE admitted were libelous. He added that he believes that his comments, such as his saying that specific people were “really horrible and mean about gays,” were “restrained and measured” and his “honestly held opinion.”

“I believe my comments on the broadcast were restrained and measured and I firmly believe that I should be allowed to voice my honestly held opinion on a matter of public interest, and that it is particularly disappointing that three of the legal threats come from people who have weekly columns in national newspapers and regular access to the national airwaves to air their views and to disagree with me if they so wish.”

He also told The Irish Independent he was “surprised” by the reaction to his comments.

O’Neill added in a speech recently that he thinks “people who actively campaign for gay people to be treated less or treated differently, are, in my gay opinion,  homophobic.”

For fuller context of O’Neill’s comments, here is the statement that got him in trouble on air: “The only place that you see it’s okay to be really horrible and mean about gays is you know on the internet in the comments and you know people who make a living writing opinion pieces for newspapers.”

When asked for examples, he listed, “Oh well the obvious ones. You know Breda O’Brien today, oh my God you know banging on about gay priests and all. The usual suspects, the John Waters and all of those people, the Iona Institute crowd.”

O’Brien: ‘People don’t take you seriously unless there is some sort of settlement.’

Bredy O’Brien, one of the six to receive an apology and settlement, said she was “very pleased to accept the apology and move forward,” during an interview on RTE Radio 1, the Journal reported.

“People don’t take you seriously unless there is some sort of settlement,” she added to the Irish Times. “The key issue here is that RTÉ walked itself into a defamation case and then offered a completely inadequate response which is a right of reply.”

O’Brien was saying that RTE was at fault because it invited O’Neill to name names but thought inviting those named to respond to his claims on air was a fix for the possible libel.

She also said to the Irish Times that she has written against homophobia and that she isn’t homophobic. Referring to a recent article she wrote, she said:

“My article was about homophobia and liberal intolerance and how we needed to tackle both. Supposing somebody was called racist instead of homophobic, do you think that person would stand back and say that is fair comment? That’s the analogy. I don’t accept that I’m homophobic.”

Iona Institute is ‘Satisfied with the apology & settlement’

Likewise, the Iona Institute, which was named in the program by O’Neill, said it is satisfied with the settlement.

The group’s director, David Quinn, provided iMediaEthics with the following statement by e-mail:

“We are satisfied with the apology and settlement.

“Our point of view is that the constant use of the word ‘homophobe’ especially when used against named people who simply disagree with same-sex marriage and adoption is what is closing down debate. We want a debate about the substantive issues (e.g. do children have a right to a mother and a father, where possible?) and not motives.

“To use an analogy, there is no doubt that some people who criticise Israel are anti-Semites, but this doesn’t mean Israel should never be criticized! (I say this as someone who has defended Israel in public).”

The settlement itself has been criticized. LGBT Noise, an Irish “independent non-party political group” advocating for LGBT rights and “civil marriage for all people in Ireland,” hosted a rally critical of RTE”s unpublishing and apology. About 750 people attended, according to the Irish Times.

At the rally, the group’s Caroline Early criticized the apology, according to a Feb. 2 Irish Times report.

She went on to suggest RTE was censoring critics of homophobia: “These actions by RTÉ explicitly contravene their role as a public broadcasters. It is not only irresponsible, but it is damaging in the extreme.”

RTE: Our libel defense ‘Unlikely to Succeed Before Jury,’ Homophobic Remarks cost us