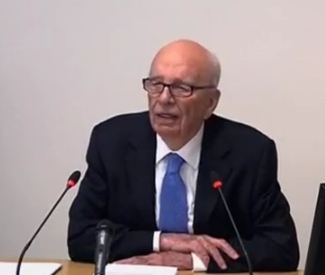 Rupert Murdoch apologized for the hacking scandal during the April 26 Leveson Inquiry hearing into press standards and practices.  The inquiry was prompted by revelations of phone hacking at Murdoch’s UK News Corp. newspaper the News of the World, which was shut down last July.

He is quoted by the New York Times as saying: “I also have to say that I failed. I am very sorry about it.”  He added that he is “guilty of not having paid enough attention to The News of the World.”  The Times reported that Murdoch also made “suggestions” of a “cover-up at The News of the World to hide the extent of the phone hacking scandal.”

Murdoch said, “The senior executives were misinformed and shielded from anything that was going on. Maybe even the editor, but certainly below that, someone took charge of a cover-up which we were victim to,” according to Bloomberg.  However, Leveson countered that Murdoch didn’t “quite answer the question of whether you really did try to understand what was going on.”

Reuters noted that Murdoch said “one or two very strong characters” at News of the World encouraged the “cover-up.” Reuters called it a “thinly veiled reference to the News of the World‘s former top lawyer Tom Crone, who has accused James Murdoch of lying.”  As we wrote last July, Crone and former News of the World editor Colin Myler claimed James Murdoch — Rupert Murdoch’s son — knew about an e-mail called “For Neville” from 2009 that indicated phone hacking wasn’t a one-time incident.

The Guardian reported that Crone responded to that suggestion in a statement calling any suggestion he “took charge of a cover-up” of phone hacking “is a shameful lie.”

At the April 26 hearing, Murdoch discussed the BSkyB bid, in which News Corp. sought to buy the remaining shares of BSkyB. Murdoch said the bid was “delegated” to his son James Murdoch, according to the Guardian‘s live blog.  He noted that because of “the hacking scandal was not a great national thing until the Milly Dowler disclosure” which also prompted News Corp. to end its attempts to buy BSkyB. In the Milly Dowler case, as we have written, News of the World was accused of hacking the voicemail of a 13-year-old who went missing in 2002.  Shortly after those accusations last July, the newspaper was closed down.

The Guardian noted in its live blog, “Murdoch refuses to say that the phone-hacking scandal would never have been exposed without the Guardian. He does, however, offer rare praise to the media organisation, saying that the Guardian ‘look after their audience pretty well.'”  The Guardian broke the story of the phone hacking of Milly Dowler among other news reports related to the scandal.

On April 25th, Murdoch said that “the need is obvious” for the Leveson Inquiry into press standards because of the “abuses shown” in the media, according to the Guardian’s live blog.

Murdoch also weighed in on the Times of London’s e-mail hacking in the Nightjack case, saying, according to the Guardian, “I am appalled that the lawyer misled the court and disappointed that the editor published the story.” He added that he was “unaware of this matter until it arose in evidence before the inquiry.”

In that case, the Times of London’s reporter hacked in 2009 the e-mail of a police detective who was running an anonymous blog called Nightjack. The blogger, Richard Horton, tried to get an injunction to remain anonymous, but the Times — which didn’t reveal it used hacking at the time — won the injunction and named Horton. The newspaper’s editor, James Harding, has apologized to the Leveson Inquiry over the e-mail hacking and for misleading the court in 2009 to believe the identity of Horton was found out in legal ways.  Horton has since filed a lawsuit against the Times.

Concerning the Gordon Brown medical records case, Murdoch said that former News International CEO and former editor of both News of the World and The Sun Rebekah Brooks contacted Brown’s wife before running the story to ask “how would you like it handled?” and that after publication, “Mr Brown wrote a personal letter to Mrs Brooks thanking her for her sensitivity in the way she handled the story. I believe that letter’s in the hands of the police.”

The Sun reported on the medical condition of Brown’s son and as the phone hacking scandal gained more publicity last year, Brown accused The Sun illegally found out.  However, The Sun denied the claims and said someone at the hospital told the newspaper about Brown’s son.

However, the Guardian reported that “former adviser to Brown, Damian McBride” countered those claims on Twitter saying that “the story appeared hours after The Sun’s first approach, certainly not ‘several days later,'” that Brooks “only contacted Sarah AFTER we told The Sun that we intended to issue a statement to PA, thus spoiling their ‘exclusive,'” and that “Although the hacking allegation turned out to be wrong, GB 100% believed it.”

Earlier this year at the Leveson Inquiry, the Sunday Times’ editor John Witherow revealed that one of its employees impersonated Brown “to obtain details about the former prime minister’s finances,” the UK Press Association reported.

Comparing Murdoch’s two days of testimony, Reuters wrote: “On Wednesday, Murdoch had appeared calm and considered, but Thursday’s tone was more hostile as the inquiry’s top counsel Robert Jay ratcheted up the pressure and described the culture of phone-hacking as a “cancer”.”

“I don’t believe in using hacking, in using private detectives or whatever, that’s a lazy way of reporters not doing their job.  But I think it is fair when people have themselves held up as iconic figures or great actors that they be looked at.”

James Murdoch testified April 24, and “distanced himself from the scandal,” according to Yahoo News.

The Guardian noted that one “key exchange” between Jay and James Murdoch had Jay asking: “There are two possibilities here. Either you were told of the evidence that linked others at the News of the World to Mulcaire and this was in effect a cover up, or you weren’t told and you didn’t read the emails properly and there was failure of governance at the company…do you accept that?”

Murdoch said that he “was given repeated assurances…that there was no evidence” of more cases of hacking. Further, when the Guardian reported there was “wider phone hacking” three years ago, Murdoch reportedly said that “he was told” that “it was a smear.”

He also put responsibility for the News of the World on its editors saying: “I think the ethical risk was something, and the legal risk around that was something that was very much in the hands of the editor.”

The close relationship between News International and UK politicians was also highlighted during Murdoch’s questioning, including what discussions Murdoch had with politicians — specifically concerning the News Corp. attempts to buy BSkyB.

As the Guardian explained in a separate report, “James Murdoch came to the Leveson inquiry to defend his reputation, and ended up spending much of the remaining six and half hours on the stand in effect defending the culture secretary, Jeremy Hunt.”

The Guardian added that the National Union of Journalists’ general secretary Michelle Stanistreet called for culture secretary Jeremy Hunt to resign because of “the revelations at the Leveson inquiry confirm what many of us have suspected all along – the contact between News International and the minister tasked with deciding the fate of the BSkyB bid was totally inappropriate.”