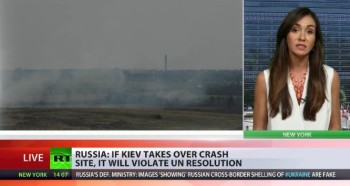 A screenshot of Russia Today's coverage of the plane crash.

UK viewers have complained to broadcast regulator OfCom about the coverage of Malaysian Airlines crash flight 17 by Russia Today. Russian Today describes itself as “the first Russian 24/7 English-language news channel which brings the Russian view on global news” and is “state-funded.”

OfCom communications manager Elliott Ball told iMediaEthics that OfCom received four complaints. He wrote, “We are currently assessing” them and “no decision has been made as to whether an investigation will be opened, yet.”

“A decision as to whether we will investigate will be made in due course,” Ball explained.

Three of the complaints were over bias and the fourth was about graphic footage of dead bodies, according to Ball’s e-mail to iMediaEthics.

Russia Today, however, stood behind its reporting and questioned “why was the world so quick to blame Russia?” in reporting on the Malaysian crash.

“Do we have the results of the investigation? It had barely begun. What happened to impartiality and factuality of the mainstream media? Apparently it is MIA,” Russia Today’s head of communications Anna Belkina told BuzzFeed.

Belkina added that Russia Today couldn’t “provide the details of our communications with OfCom” including its “support of our position” and reporting given OfCom’s rules.

Two headlines about the crash on Russia Today’s website July 27 were:

iMediaEthics asked Russia Today’s Belkina for further comment. She provided iMediaEthics with the same statement she gave BuzzFeed, published in full below:

“While we would love to provide the details of our communication with Ofcom and the facts and arguments that RT had presented to the regulator in support of our position, we cannot do so as it would violate the regulator’s rules.

“It is sad that the news media of the United States and the United Kingdom, which has always prided itself on its commitment to asking hard questions of its own government when it comes to domestic politics, in this particular situation is readily swallowing up the ‘party line’ of the Department of State and the Foreign Office, demanding no proof of their claims.

“Why was the world so quick to blame Russia? Because that’s what the President of the United States, the US Department of State and their allies were doing. Did they have any proof? None that they have presented, beyond references to social media chatter.  Do we have the results of the investigation? It had barely begun. What happened to impartiality and factuality of the mainstream media? Apparently it is MIA.”

Earlier this month, reporter Sara Firth quit Russia Today over the news channel’s coverage of the Malaysian plane crash as iMediaEthics previously reported. Firth said Russia Today’s coverage included “the most shockingly obvious misinformation.” Russia Today denied her accusations, arguing to iMediaEthics  “We show all sides of the story, even if everyone else has already decided which side is to blame.”