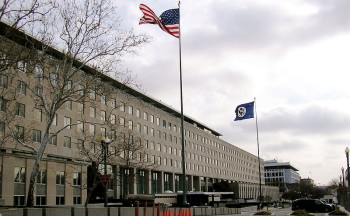 Izvestia reported on “an archive of letters, supposedly written by State Department employees to a prominent Russian gay, bisexual, transgender and intersex activist” but were clearly fake because there were basic grammar errors.

Izvestia‘s Nov. 18 article claimed the State Department had LGBT activists accuse “prominent Russian politicians and officials” of being homosexual. “The news was splashed across the front page in a two-part series this week,” according to the New York Times.

A rough Google translate of the Izvestia headline is: “To discredit Russian officials used LGBT activists.”

The letters “were supposedly hacked from the U.S. State Department,” Sky News reported. 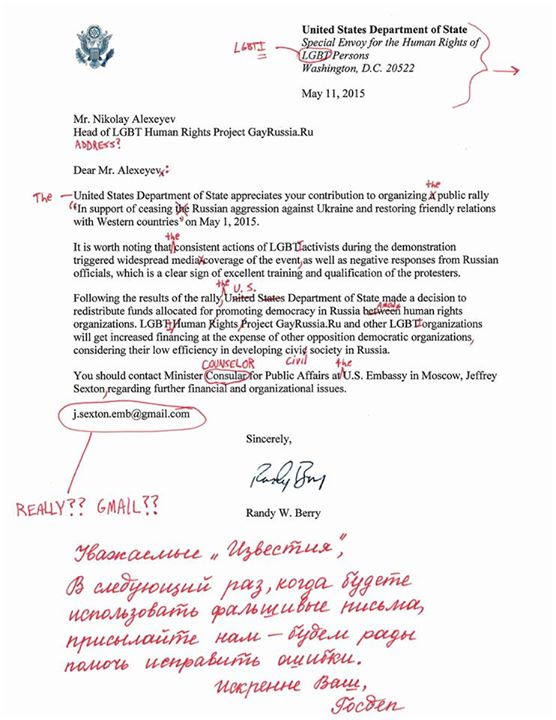 According to BuzzFeed: “The handwritten note at the bottom — and the tweet — said, ‘Dear Izvestia, next time you are going to use fake letters — send them to us. We’ll be happy to correct the mistakes. Sincerely yours, Dept of State.'”

Further flagging the letters as bogus, Nikolay Alexeyev, the activist to whom the above letter was addressed, told the New York Times: “All these letters are fake. I have never communicated, either with the U.S. Embassy in Moscow or with the State Department.”

iMediaEthics has written to Izvestia for comment, to ascertain where the newspaper really obtained the letters, and to ask if it will be publishing a correction.
Izvestia is a Moscow-based newspaper. According to Encyclopedia.com, it was “founded in 1917 as the official organ of the Soviet government.”