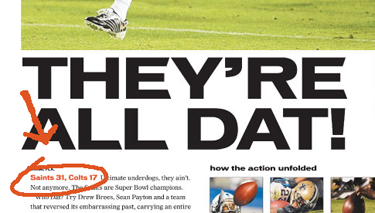 Monday, mere hours after the New Orleans Saints beat the Indianapolis Colts in the 2010 Super Bowl, the Virginian-Pilot misprinted the game’s score. Readers received a newspaper declaring the game score Colts 31, Saints 17. And, according to a correction and apology from editor Dennis Finley, “The mistake was repeated on Page 9.”

It almost seems too bad to be true–reversing the score of the most important game of the year for one of the most loved sports in the country. Surely someone working at the paper must have been enough of a fan of football to notice this mistake?

In his apology, Finley asks the question all his readers must have been thinking “How could this happen?”

“It’s just one of those things,” Maria Carrillo, the Virginian-Pilot’s managing editor, told AOL News. “We went over every aspect of that story a dozen times. Everything but the score.”

Finley blames simple “human error,” and points out why even a rote mistake like this can become a question of ethical practice.

“The reason I am writing this column and the reason this mistake is so disheartening is that I know it will make you question our credibility and professionalism,” he writes.

Craig Silverman, Regret The Error, weighs in to say that the gaffe itself doesn’t call into question the newspaper’s professionalism as much as does Finley’s use of the word “horrible” to describe the error in an earlier correction posted Monday. Silverman writes yesterday:

…It’s horrible when you falsely accuse someone of something that damages their reputation, or confuse a victim with their killer or… well, the list goes on. Getting the score of the Super Bowl wrong is embarrassing — but it’s not horrible. A little perspective, please…

Finley’s full apology is here . Some readers, however, did not take kindly his notification that they would have to purchase the corrected version of the paper for their souvenir.

For example, WhoDatWeDat writes: “Are you REALLY charging for a new correct copy? Seriously? I have been a Saints fan for many years, this is history, and you want to make fans pay $40 -$80 to get a correct copy? Your [sic] out of your mind…I would rather gladly take my money else where to purchase a $100 copy of the right thing, rather than pay for something you messed up. You should be handing these corrected versions out. Not selling them. Absolutely Ridiculous. Chalk up another lost customer.”