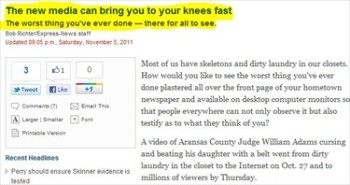 The San Antonio Express-News‘ public editor Bob Richter weighed in on the recently published video of Texas family law judge William Adams “beating his daughter with a belt.” — a video Richter called “brutish and sickening to watch.” Fox News noted that Adams “presides over child abuse cases.”  According to Fox News, Adams’ daughter, Hillary Adams, who is shown in the video, “posted the 8-minute clip on YouTube.”

Richter noted that “In newsrooms across the nation, the question was not whether to publish the story, but how prominently to play it.”  For example, the Express-News published a story on the video on its Nov. 3 front page.  Richter described the story as “horrible, yet riveting and damning.”

According to Richter, the newspaper’s ethics code calls for Express-News staff to “verify before you publish” any images, photos, or online information just as the staff would any textual information.

Richter noted that because of new technology and the new media, once something is published, it can easily make the rounds online, in print, and in broadcast, across the country.  “Fair? Unfair? that’s the way it is,” Richter commented.