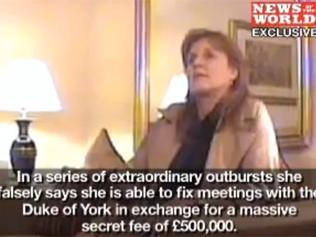 A screenshot from the News of the World report in 2010 (Via News.com.au)

Sarah Ferguson, the Duchess of York, is suing News UK over a 2010 undercover sting by its now-fired and convicted reporter Mazher Mahmood.

As iMediaEthics has previously reported, Mahmood, known as the fake sheikh, was convicted last month and sentenced to 15 months in prison for conspiracy to pervert the course of justice.  He was charged because of his role in a trial against UK pop star Tulisa Contostavlos. Mahmood’s undercover reporting claimed that Tulisa helped get him drugs. Based on that, the UK prosecutors charged Tulisa for drug trafficking. But, when Tulisa was on trial, the case collapsed and was thrown out because the judge said Mahmood lied and influenced statements to police.

Ferguson was busted in an undercover sting in 2010 where she was recorded saying she would introduce Mahmood, who was posing as a businessman, to her ex-husband, Prince Andrew, in exchange for £500,000.

Now that Mahmood has been convicted, Ferguson is suing for  £25 million for lost earnings, the Guardian reported, and “an undisclosed sum for distress and upset.”

The UK Mail reported on Ferguson’s lawsuit after seeing it.

“The writ claims Mahmood –who was jailed last month for tampering with evidence in the collapsed drugs trial of pop star Tulisa Contostavlos – invaded the Duchess’s privacy and ‘used deceit’ to induce her to make ‘unguarded statements to her detriment,'” the Mail reported. “She says that when the News Of The World ran the story, it took her comments out of context, causing ‘serious embarrassment, humiliation, distress and reputational damage’ and huge financial losses.”

The Mail noted that Ferguson said at the time she had been drinking and in financial stress when the undercover incident occurred.

According to the Mail, News Group Newspapers is defending itself against the lawsuit, arguing the undercover reportage was in the public interest and the newspaper was simply reporting on comments she made on tape.

Last week, the UK press regulator IPSO ruled against the Mail for publishing photos of Ferguson’s daughter Princess Beatrice in a bikini while she was on vacation.