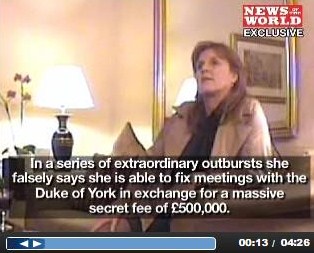 This screenshot from News of the World's video shows Sarah Ferguson before accepting the fake bribe.

When News of the World caught Sarah Ferguson on camera accepting money from “fake sheikh” Mazher Mahmoud for access to her ex-husband, the tabloid broke a story that grabbed headlines across the world for several days. News of the World published its story May 23.

But in the wake of the Sarah Ferguson sting scandal, many journalists are wondering if journalistic principles support News of the World’s expose.

The Guardian wrote May 25 that Ferguson likely “had a reasonable expectation of privacy in relation to the conversation” and that in order for her conversation to be published, News of the World “needed justification.”

The Guardian quoted Robert Jobson, the royal editor of News of the World, as saying “What is very serious here is that she’s so desperate that she’s prepared to jeopardise the reputation of her ex-husband and of the country, and of an important international ambassadorial role, which is, after all, funded in terms of the expenses by the taxpayer.”

But Ferguson and Prince Andrew divorced 14 years ago.

Was Ferguson committing a crime worthy of an undercover operation?

The Guardian also wrote that News of the World doesn’t have an exposing of “hypocrisy” or a “wrongdoing by public officials” defense.  Ferguson hasn’t taken a stand against accepting money for access and she isn’t a public official.

James Macintyre wrote on New Statesman May 23 that it’s important that Ferguson seemingly didn’t break the law, and that in the video, Ferguson doesn’t implicate Prince Andrew.

Likewise, The Guardian noted that the News of the World report “does not suggest that Prince Andrew was going to do anything improper.”

But as ABC News wrote, tabloids have been given a bit more legitimacy lately for their breaking stories.

ABC News reported Howard Kurtz told Good Morning America that “We should not be so quick to look down our noses at a papers like the National Enquirer.”

“I’m not a fan of checkbook journalism, but what the National Enquirer did in the John Edwards case was old-fashioned street journalism,” ABC News reported Kurtz said.

iMediaEthics wrote February 23 when the National Enquirer was declared eligible for a Pulitzer Prize for its breaking the story that presidential candidate John Edwards’s extramarital affair.

But, those are just two stories, and the Ferguson story was obtained through deceptive and undercover measures.  So is it really fair to elevate tabloids to a higher level of journalism?

ABC News reported May 26 that  Bonnie Fuller, editor-in-chief of Hollywood Life, a celebrity news and gossip Web site, wasn’t sure if the Ferguson story was in the public interest.  Fuller said that John Edwards story was because he was running for president.

Howard Kurtz discussed the ethics of News of the World’s report and several other journalists’ perspectives in his May 25 Media Notes column for The Washington Post. Kurtz reported no real consensus among journalists, citing, for example, The Guardian’s Roy Greenslade, who said the report was in the public interest, and then Times of London columnist Libby Purves who feels for Fergie.

“Poor woman. She is not evil or particularly greedy but just, frankly, a bit of an idiot adrift in a world that is clever and laughs at her,” Purves wrote.

Kurtz also compared the Fergie video with the ACORN footage, since both were created with fake identifies and undercover cameras.  iMediaEthics wrote March 28 about the media coverage of nonprofit ACORN.  In 2009, two undercover conservative activists released an undercover video of ACORN employees advising how to evade taxes and establish a brothel.

Kurtz reported The Independent’s  Stephen Glover “wrestles with the ethics and ultimately approves of the tabloid’s probe.”  Glover wrote that “you cannot easily encourage a person to say or do something out of character, though one can imagine exceptions where extreme pressure might be put on someone.”

The Guardian wrote that because Ferguson was getting money for “access to a public official,” publication of the report was OK. “The whole transaction was ‘tainted’ and its exposure was, we suggest, justified for that reason.”

But, The Guardian was concerned that News of the World did not tell Ferguson about the report in advance of its publication.

Shmith cited both the Australian Journalists’ Association’s code of ethics and Great Britain’s National Union of Journalists.  Australia’s code says journalists should “use fair, responsible and honest means to obtain material. Identify yourself and your employer before obtaining any interview.”

And Great Britain’s says reporters should use “honest, straightforward and open means, with the exception of investigations that are both overwhelmingly in the public interest and which involve evidence that cannot be obtained by straightforward means.”

The U.S.’s Society of Professional Journalists’ code of ethics advises that journalists “avoid undercover or other surreptitious methods of gathering information except when traditional open methods will not yield information vital to the public. Use of such methods should be explained as part of the story.”