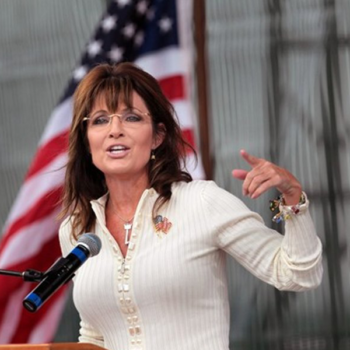 Sarah Palin’s libel lawsuit against the New York Times was thrown out today, dismissed “with prejudice.”  Palin sued the Times over its June editorial that originally, inaccurately claimed Jared Lee Loughner was incited to shoot Rep. Gabby Giffords because of a map sent out by Palin’s political action committee. The Times corrected its editorial within 13 hours, but Palin, the former Alaska governor and former vice presidential candidate, quickly said she was “exploring options” with her lawyers.

Manhattan judge Jed Rakoff ruled that the editorial wasn’t defamatory, the Associated Press reported. “What we have here is an editorial, written and rewritten rapidly in order to voice an opinion on an immediate event of importance, in which are included a few factual inaccuracies somewhat pertaining to Mrs. Palin that are very rapidly corrected,” Rakoff found. “Negligence this may be; but defamation of a public figure it plainly is not.”

The New York Times uploaded a copy of the Aug. 26 ruling. In the ruling, Rakoff wrote that “mistakes will be made” but “responsible journals will promptly correct.”

“If political journalism is to achieve its constitutionally endorsed role of challenging the powerful, legal redress by a public figure must be limited to those cases where the public figure has a plausible factual basis for complaining that the mistake was malicious.” However, Palin’s lawsuit didn’t, he wrote, so he dismissed the case. Specifically, Rakoff wrote that the lawsuit didn’t “identify any individual at the Times who allegedly acted with actual malice,” and flagged the newspaper’s corrections in print and online. “Such behavior is much more plausibly consistent with making an unintended mistake and then correcting it than with acting with actual malice,” Rakoff wrote.

Further, while the Times had published in news stories that the Palin political action committee map didn’t incite Loughner, the judge pointed out that the articles had been published “years earlier” and the Times‘ editorial writer may not have read or remembered them.

“We were delighted to see today’s decision.  Judge Rakoff’s opinion is an important reminder of the country’s deep commitment to a free press and the important role that journalism plays in our democracy.  We regret the errors we made in the editorial.  But we were pleased to see that the court acknowledged the importance of the prompt correction we made once we learned of the mistakes.  In the words of the court, ‘if political journalism is to achieve its constitutionally endorsed role of challenging the powerful, legal redress by a public figure must be limited’ to cases where there is something more than an honest mistake.”

iMediaEthics has written to Palin’s attorney for a response to the ruling.