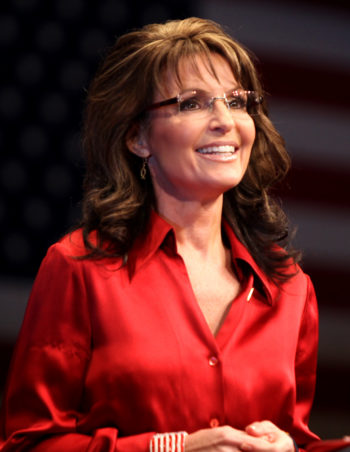 The New York Times wrongly linked the 2011 shooting of Rep. Gabby Giffords to former Alaska governor Sarah Palin, suggesting Palin was to blame for Giffords’ shooting.  The Times’ error wrongly said Giffords’ shooter Jared Lee Loughner was incited to shoot after seeing Palin’s political action committee’s map showing Giffords’ and other electoral districts under stylized cross hairs. However, “it’s unclear if Loughner even knew of Palin’s map” and “his focus on Giffords began as early as 2007,” the Washington Post explained in a fact check of Times‘ claim.

Loughner was sentenced to “seven consecutive life terms, followed by 140 years in prison” in 2012 after pleading guilty.

Palin is exploring suing the Times over the editorial error, tweeting, “am talking to attorneys this AM and exploring options.”

The editorial was corrected within 13 hours, Times spokesperson Danielle Rhoades Ha told iMediaEthics. She also pointed to the @NYTOpinion Twitter account, which says “our readers called us on the mistake.”

We're sorry about this and we appreciate that our readers called us on the mistake. We've corrected the editorial. https://t.co/t1FZ3iEYQJ pic.twitter.com/k7WW5uJIQO

The New York Times editorial was published after the June 14 shooting of U.S. House of Representatives Majority Whip and Louisiana Congressman Steve Scalise at an Alexandria, Va. baseball field.  The Times‘ June 14 editorial, signed by its editorial board, was headlined, “America’s Lethal Politics.” It originally read in part:

“In 2011, when Jared Lee Loughner opened fire in a supermarket parking lot, grievously wounding Representative Gabby Giffords and killing six people, including a 9-year-old girl, the link to political incitement was clear. Before the shooting, Sarah Palin’s political action committee circulated a map of targeted electoral districts that put Ms. Giffords and 19 other Democrats under stylized cross hairs.

“Conservatives and right-wing media were quick on Wednesday to demand forceful condemnation of hate speech and crimes by anti-Trump liberals. They’re right. Though there’s no sign of incitement as direct as in the Giffords attack, liberals should of course hold themselves to the same standards of decency that they ask of the right.”

Before being corrected, the paragraph was flagged by readers on Twitter.

The New York Times is well aware that any link between Palin and the Giffords shooting were long debunked, but they're going for it anyway. pic.twitter.com/BgzaQFQMz6

The updated, corrected version significantly noted that in the Giffords case, “no connection to the shooting was ever established.” The Times also removed the sentence stating there was a “sign of incitement” in Giffords’ attack. In addition to editing the editorial, the Times posted a correction June 15 that reads, “An earlier version of this editorial incorrectly stated that a link existed between political incitement and the 2011 shooting of Representative Gabby Giffords. In fact, no such link was established.”

Later on June 15, the Times corrected another error in the editorial. That correction reads, “The editorial also incorrectly described a map distributed by a political action committee before that shooting. It depicted electoral districts, not individual Democratic lawmakers, beneath stylized cross hairs.”

iMediaEthics notes that a public editor could have gotten to the bottom of what went wrong, but the Times recently abruptly fired its sixth public editor, Liz Spayd, when it ended her contract a year early and eliminated her position in favor of a new, vague Reader Center. iMediaEthics asked the Times if the Reader Center would have a website location; the Times said it is “based at our news desk but works with every desk in the newsroom and the opinion section,” and pointed to Reader Center editorial director Hanna Ingber’s interview with Nieman Lab.

NewsDiffs, the website that tracks changes to news articles from the New York Times and others, captured the changes. The pink shows the article from June 14 at 10:52 PM with the green showing changes made by June 15 at 11:18 AM.

Here's the before and after of the two paragraphs from the @nytimes editorial pic.twitter.com/n8GJvHSl2C

Palin tweeted June 15 suggesting she may sue over the error and called the editorial “sickening.” iMediaEthics has written to her website to ask if she has been in contact with the Times over the error.

(1/2) @nytopinion – commonsense suggestion by a journalist, am talking to attorneys this AM and exploring options. BTW, wonder.. pic.twitter.com/jACvxwUBZH

(2/2) …WHY someone would no longer be in public eye? Think constant libel & slander have anything to do with it? 🤔

With this sickening NYT's editorial, the media is doing exactly what I said yesterday should not be done. Despite… https://t.co/fqgkwvpKA8