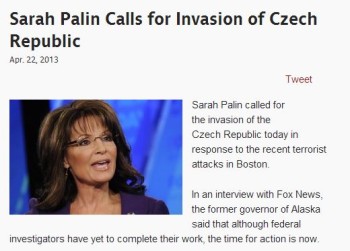 A Polish magazine reported on the Daily Currant's satire story (above) as if it were real.(Credit: Daily Currant, screenshot)

Polish magazine Wprost was hoaxed by a satire article claiming Sarah Palin wanted President Obama to invade the Czech Republic as a retaliation for the Boston Marathon bombings, the Examiner and Jim Romenesko reported.

The humor website The Daily Currant’s April 22 story “reported” Palin made her comments on Fox News’ Fox and Friends, claiming the suspects in the bombings, brothers Tamerlan and Dzhokhar Tsarnaev, were “from the Czech Republic.” (Their family’s ethnic roots are in Chechnya.  Oddly, for real, the Czech Republic’s US ambassador Petr Gandaloviè issued a statement after the bombings to clarify that “the Czech Republic and Chechnya are two very different entities.”)

“I betcha I speak for a lot of Americans when I say I want to go over there right now and start teaching those folks a lesson. And let’s not stop at the Czech Republic, let’s go after all the other Arab countries too.

“The Arabians need to learn that they can’t keep comin’ over here and blowing stuff up. Let’s set off a couple of nukes in Islamabad, burn down Prague, then bomb the heck out of Tehran. We need to show them that we mean business.”

A Google Translate of the Wprost article wasn’t precise, but indicated that Wprost re-published several of the fake quotes The Daily Currant created for its article.

Below, see two screenshots of the Google Translate of the Wprost article.

Screenshots of a Google cache of Wprost’s article indicate that Wrpost used quotes from the satirical article. Click through to see a larger image  (Credit: Wprost)

This is at least the third time a Daily Currant story has duped the media. In February, the Washington Post published a story based on the Daily Currant‘s satire story claiming Palin was joining Al Jazeera. Even worse, the Daily Currant’s founder Daniel Barkeley told iMediaEthics at the time that the Post didn’t just fall for the hoax story — it also misquoted the story.

“In this case what disturbs me most was that the Washington Post misquoted our article and changed a direct quote to make it sound more realistic,” he told us.

iMediaEthics has written to Wprost asking how it learned the story was a phony, if it will publish, or has published, a correction, and if the article was published in a print edition as well as on their website. We’ve also reached out to The Daily Currant for comment. We’ll update with any responses.

Thanks to ASRLab‘s Robert Slawinski for sending this tip. Email us your story tips at info@asrlab.org.

Check out all of iMediaEthics’ reports on the news coverage of the Boston Marathon bombings and the police manhunt for the Tsarnaevs.