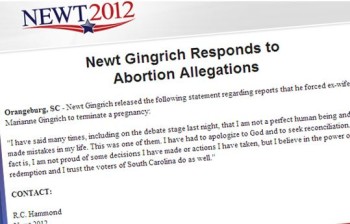 A screenshot from one of the fake e-mails. (Credit: CBSNews, screenshot)

The phony e-mail, which “came from an email account made to look like an official CNN account but is not actually affiliated with the news network,” alleged that Newt Gingrich “pressured his ex-wife Marianne Gingrich to have an abortion.”

According to the Daily Caller, CNN doesn’t know “how many people received the false report.”  The New York Daily News reported that the e-mail came from the e-mail account “BreakingNews@mail.cnn.com.”

That fake alert came from an e-mail address @newt20l2.com (instead of the real newt2012.com).