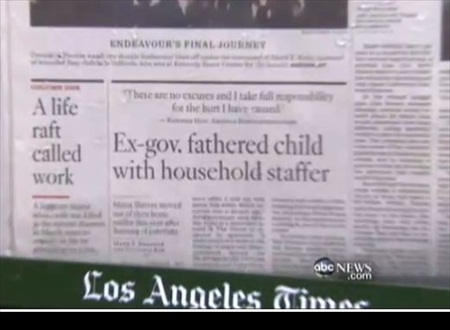 Before the woman in question chose to reveal her identity, the media debated on whether to name the woman who had a child with Arnold Schwarzenegger. The media ethics involved included editorial decisions about what names and photos are appropriate to publish. (Credit: ABCNews, screenshot)

After news broke that former California governor Arnold Schwarzenegger and his wife Maria Shriver were separating because he had a child out of wedlock, news outlets have scrambled to learn more details about the affair and the mother of the child.

As the story continues to develop, news outlets are deciding what information about the woman and child is appropriate to publish, and ethicists debate the question of privacy.

The Los Angeles Times broke the story that there was a child on May 17 and took the firm stance that it wouldn’t name the woman or the child  “to protect their privacy.”

The Californian added the Los Angeles Times “took pains” in avoiding identifying them.  “It even avoided describing her occupation, dubbing her vaguely a ‘member of the family’s household staff.'” But, according to Californian, TMZ named the woman and posted pictures of her and other news outlets followed suit.

The Californian noted that media outlets that have used pictures of the mother have blurred or blocked out the image of the child.

Yahoo News also commented that the Associated Press did name the woman but “only after it had been floated by multiple news outlets” and that the AP noted it didn’t “independently” check her name.

Yahoo News noted it named her because so many other outlets had.

“Some say since she’s a private citizen and paid privately (i.e. without tax dollars), she’s entitled to this shield. Also, naming her could lead to the IDing of the kid, whom everyone agrees should not be named.”

Lee noted that the counter-argument is that “by her own actions she has become public” so maybe she isn’t granted privacy.

The Society of Professional Journalists’ president, Hagit Limor, reportedly told the Californian that by naming the woman, media outlets are effectively naming the child.  “I understand the pressure to not appear as if you’re behind on a story, but at the end of the day, you have to be able to look at yourself in the mirror.”

She added.that journalists should use caution when reporting on children. She is quoted as saying:

“Even if someone is a criminal, we take consideration of their status as a minor in reports on juvenile court proceedings.  This is a situation where a child is absolutely innocent of anything.”

ABC News, which named the woman, noted that Shriver has “appealed for compassion and privacy in breaking her silence on her estranged husband’s admission.”

Several tenets of the SPJ’s code of ethics address privacy and reporting on children. For example:

Poynter’s Julie Moos noted that “relevant ” questions include if Schwarzenegger paid for her house, hired her properly, and if his “support” affected his job as governor.

“The underlying question of journalistic interest is: How — if at all — did this relationship affect California taxpayers? The rest is celebrity or entertainment news,” Moos wrote.

Poynter’s Kelly McBride commented that the affair story is newsworthy, but that important questions include asking “did anything inappropriate happen with her employment when she was working in the governor’s (home)?”

McBride also wrote that journalists should look into if she was paid by taxpayers in any way. The Californian noted Schwarzenegger didn’t take “a governor’s salary.”

Gossip blog Gawker was criticized by the Los Angeles Times for its speculative report on the woman and child.  As the Times described it, Gawker’s story “combined extra-thin reporting and mistaken assumptions, leading to the misidentification (though with great bravado) of Schwarzenegger’s supposed mistress and ‘love child.'”

Gawker’s reporter, John Cook, claimed to the Times he based his story on an old story from a UK newspaper speculating about an affair and out-of-wedlock child.

Gawker retracted its story admitting it named the wrong woman. Gawker went on in its retraction to note that it never had  comment from the woman for its story, but that it did hear from her son who denied being Schwarzenegger’s son.

Meanwhile, some stories like California NBC-affiliate KGET’s story, highlight personal opinions of people who once came in contact with the woman in question.  KGET  reported a former realtor’s 7-year-old memories of working with the woman, noting that the woman and the child “kind of need their privacy” but still stating about the child, who was probably a six or seven year-old child then:

“Actually when I saw him, he was a little thinner than the one I saw on TV there, so it didn’t dawn on me because it could have been. Actually, I have to be honest with you I didn’t even think it looked like him. But now that I see the picture, yeah.”

LATimes editor Russ Stanton noted that the newspaper views Schwarzenegger’s behavior as the newsworthy part of the story.  Stanton went on to explain the LA Times didn’t see how naming the woman, and therefore the child, was “necessary or appropriate.”  Adding that other media outlets follow different standards or policies, Stanton commented: “We will stick by ours, regardless of what others do.”

US News commented that the Los Angeles Times decision to hold off naming the woman was the “right” choice to make.

“It was perhaps inevitable that someone, somewhere, would track down the name–or a name, anyway–in the episode involving former California Gov. Arnold Schwarzenegger and the child he fathered outside his marriage a decade ago. And that’s all the more reason to commend the Los Angeles Times for doing the right thing, and sticking to its initial decision.”

While the woman isn’t apparently a victim, which would lead to calls for the media to be respectful of her privacy, US News added that the child’s privacy should be protected.

“In paparazzi-packed Southern California, the child would almost certainly endure unwanted attention, even harassment, from photographers and agents of both legitimate and sketchy news personnel,” according to US News. By not naming the woman, US News noted the LA Times protected the child’s privacy.

The St. Louis Post-Dispatch noted it didn’t name the woman and explained its reasoning:

“We have decided that the Schwarzenegger story should be treated like any other story about a celebrity or politician involved in an affair. In most cases, these items appear only as briefs in the paper, noting the breakup of a marriage or filing of divorce papers. (In Wednesday’s edition, we did run a longer piece because it included the first public statements of both Schwarzenegger and his wife, Maria Shriver, about the affair.)”

The Post-Dispatch cited comments by Bill Keller, the New York Times’ executive editor, in which he said that the Times’ would “need a pretty compelling reason NOT to give readers information we think they care about.”  Keller added that the Times didn’t think privacy outweighed keeping information from readers.

In one of its articles about the affair, the New York Times noted that some websites have linked to the woman’s MySpace page, which features pictures of the child.

The Post Dispatch, which didn’t name the woman, explained it chose not to name her “unless the circumstances of the story merits it.”

MediaBistro reported that TMZ’s Harvey Levin criticized CNN via Twitter for changing its position on naming the woman.

According to MediaBistro, when Levin first appeared on CNN to comment on the story he was instructed against identifying the woman, but when he was on CNN the next day, CNN named the woman.  And, to add insult to injury, CNN credited the Times for breaking the name of the woman, when TMZ named her the day prior.

“In other words rather than having a point of view and sticking with it, @CNN wanted to change it’s moral position and used @nytimes.

“Ridiculous. If they want to take a moral position, stick with it. Don’t be a lemming …that’s the problem with traditional media.”

Yahoo News questioned if the press went “too far in identifying” the woman.

“At its most lurid, the coverage seems akin to stealing an intimate family photo album and scattering its contents around world.”

Yahoo News added that The Daily Beast’s Howard Kurtz, claimed the woman “did not ask to be at the center of a white-hot political scandal” and that she hasn’t made any statements, appearances or lawsuits.

In an update to Kurtz’s Daily Beast story, it was admitted that : “Correction: An earlier version of this story suggested that The Daily Beast refrained from publishing the housekeeper’s name. Her photo had been posted only briefly, as the story said, but her name was reported throughout the day Wednesday until a decision was made to take it down.”