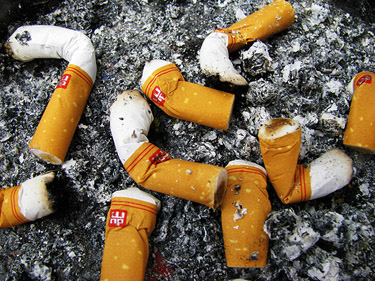 There’s a great journalistic payoff in writing a contrarian story, at least one that is accurate and fair: your story may improve peoples’ lives or correct a dangerous misconception.

But sometimes a contrarian story doesn’t access some previously unknown truth, but rather distorts the truth, Paul Raeburn writes in a recent post at the Knight Science Journalism Tracker. Raeburn argues that the lure of the contrarian story caused a heap of unnecessary reports on a new study showing higher diabetes rates in people who quit smoking.

Raeburn points out that though the results sound shocking–quitting smoking has an adverse effect–it’s actually a more banal situation: quitters tend to gain weight, and weight gain is associated with increased risk of diabetes. “Why did everybody write this story, which seems to amount to very little? Most readers understand that weight gain can lead to diabetes, and all science writers ought to know that,” he writes, answering his own question: “Here’s my suspicion: Many science writers love contrarian stories.”

Raeburn implies that if the story hadn’t had the association with tobacco, it probably wouldn’t have been written or picked up as widely. He’s probably right. “Overweight people more likely to get Diabetes” doesn’t have the same ring to it as “Ex-smokers more likely to get Diabetes.” Essentially, a number of publications went with what is pretty much a non-story, Raeburn argues.

This isn’t necessarily as much of an ethical problem if your contrarian story doesn’t have the potential to mislead your audience. But the coverage Raeburn critiques risks misleading people into thinking quitting smoking is harmful, when it is decidedly not. This may be further amplified by the way the science is presented in the news coverage Raeburn cites: often omitting mention of the issue of weight gain high in the story.

Reuters leaves off noting weight gain until the second paragraph of its story.  Raeburn says it should have been the first.  An NPR post saves weight for paragraph five. While the BBC puts it in paragraph three.

Practically, this makes sense; if the story were written with weight-gain prominent in either the headline or the lede, the news value (and contrarian-ness) would be diluted. But as Raeburn says, this is precisely why it is ethically questionable to go after a story for its contrarian nature. Covering a scientific development like this as a contrarian story makes it hard to avoid misleading your reader or misrepresenting the science. “Stories about bad things that happen when people quit smoking make great news stories. (Man bites dog!)” Raeburn writes. “But not if they persuade smokers not to quit. Because we know that’s not what the research we’re covering is trying to say.”

A quick test can reveal if a science story runs this risk: If it’s necessary to leave out critical information (like that weight-gain in quit-smokers is what increases diabetes risk) to make a story newsworthy, then a journalist should consider not writing it at all.

Interestingly, the Los Angeles Times, seems to have done this and then gone forward with the story anyway–essentially writing a very non-news story: “Weight gain linked to diabetes.” (Just insert “from quitting smoking” and you’d have their headline.)  This story avoids misleading but it loses much of its newsworthiness, supporting Raeburn’s hypothesis that other coverage of the story may have been motivated by the siren call of contrarian stories.

Read his critque in full here.