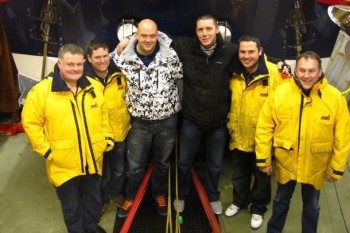 In its print edition, The Daily Record doctored the above photo to remove one of the four men wearing yellow jackets. The above is the original photo. (Credit: Daily Record)

The Daily Record doctored a photo to remove one person but claimed it was OK because the person in question was facing criminal charges for a separate matter.

The Record, a Scottish daily newspaper, did not disclose to readers that the photo was manipulated.

The photo showed a group of men from the Arbroath Lifeboat Station who saved two men’s lives after their jet skies broke down.  The picture accompanied a Feb. 26 story, “Our Heroes 2014: Arbroath lifeboat crew receive nomination after rescuing two jet-skiers from freezing North Sea waters,” which reported that the lifeboat station crew was nominated for an “Emergency Hero Award” for their actions.

One of the lifeboat station crew, Rod McLean, complained to the Press Complaints Commission about the photo doctoring. “In this instance, the precise line-up of men shown in the photograph was of particular significance as they were not named in the coverage; the photograph was the only means by which the men involved were identified,” the Press Complaints Commission explained.

The newspaper defended its doctoring of the photo because of legal advice. At the time, the man who was Photoshopped out was facing criminal charges for fish poaching in a separate case. (The Daily Record reported in July 2013 about four charges against Arbroath Lifeboat coxswain Tommy Yule.)

The Photoshopped version of the picture was only published in print, the Press Complaints Commission’s Michael McManus confirmed to iMediaEthics.

The online version of the story includes three photos, one of which is the undoctored photo in question.

After the complaint with the PCC, the Record said it would publish a clarification about why it doctored the photo.

The PCC wrote that the Record’s doctoring of the photo without disclosure breaks the PCC’s accuracy code.

iMediaEthics has written to the Record for more information and asked the Arbroath Lifeboat Station for comment.