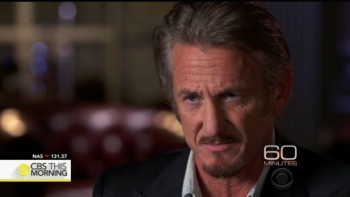 Penn criticized journalists and stood by how he covered El Chapo. “I’m really sad about the state of journalism in this country,” Penn told Rose. “It has been an incredible hypocrisy and an incredible lesson in just how much they don’t know and just how dis-served we are. Of course I know that there are people that don’t like me out of the gate…journalists who want to say that I’m not a journalist. Well, I wanna see the license that says that they’re a journalist.”

“I don’t have to be the one who reports on the alleged murders or the amount of narcotics brought in. I go and spend time in the company of another human being,” Penn said, explaining that he wanted to learn more about El Chapo because he doesn’t think “the policy of the war on drugs” has changed.

Earlier this month, jaws dropped when Rolling Stone published an article by Penn based on an interview with El Chapo, mostly because the magazine agreed to allow El Chapo to have pre-publication approval. The interview was conducted while El Chapo was still on the run and published shortly after his re-capture.

In the interview with Rose, Penn shared a little bit of information about the controversial agreement to allow El Chapo prior approval. “What was brokered for me to have the interview with El Chapo was that I would finish the article, send it to him, and if he said no, then that was no harm, no foul to any reader…it would never be printed,” Penn claimed. iMediaEthics has written to Rolling Stone to ask if the magazine’s editors agree with Penn’s characterization of the agreement and if El Chapo and Penn negotiated the prior approval agreement independent of the magazine or if Rolling Stone and Penn set up the terms before El Chapo agreed.

The Society of Professional Journalists called the prior approval “inexcusable,” a sentiment with which iMediaEthics agrees.  “The whole story was at continual risk by the prospect that El Chapo could freely reject the article if it did not please him,” iMediaEthics’ editor-in-chief Rhonda Roland Shearer said. “The agreement for approval by a source influenced just as sure as the Sword of Damocles over Penn’s and Rolling Stone owner’s heads.” Rolling Stone publisher Jann Wenner, however, claimed the pre-approval was not “a meaningful thing.”

Rose asked Penn about criticism that the article didn’t seem to hold El Chapo accountable or ask tough enough questions. Penn argued that he wasn’t “present” to see anything that El Chapo did that is bad and that he only wrote about what he saw.

Penn said he wanted to discuss the war on drugs with readers and the interview with El Chapo was “an anchor” into the discussion.

Rose called out Penn for saying that he basically doesn’t regret his own actions but accuses people of misunderstanding him.

“I was baffled at his willing to see us,” Penn said of El Chapo, noting that he isn’t sure he isn’t in danger. “I can’t say for sure that there’s no risk,” Penn admitted. Text massages between El Chapo and actress Kate del Castillo, who set up the meeting between El Chapo and Penn and went with Penn to meet him, show Chapo said he wanted to “take care of everything” for the actress, calling her “presence” a “beautiful thing,” saying “I love you” and so on.