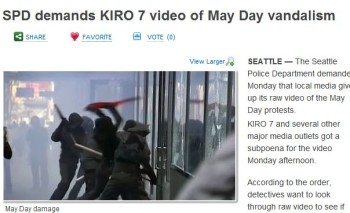 Seattle's KIRO TV reported May 7 that the Seattle Police Department sent subpoenas calling for videos of May 1 protests.

In a May 7 story, CBS-affiliate KIRO-TV 7 reported that it “and several other major media outlets got a subpoena” for “raw video” to “identify the people who damaged buildings and businesses” in May 1 protests.

The Stranger reported earlier on May 7, before the news outlets received the subpoenas, that police spokesperson Mark Jamieson said:

“There’s a lot of stuff that didn’t make broadcast.  There’s a lot of raw video that detectives would be interested in… We’re in the process of writing up all those subpoenas to deliver to all the media right now.”

The Stranger explained that its coverage of the potential subpoenas was prompted by a “line in documents charging some May Day protestors” in which the police referenced seeing mention of a “video provided by Channel 7 news to our department.”  According to the Stranger, the police spokesperson suggested the video was seen “either on the web or on television” and the prosecutor’s office spokesperson Dan Donohoe also confirmed the video “was provided” to the police.

The Stranger originally had questioned: “Did KIRO hand tape over to the SPD without a subpoena?”  We wrote to KIRO to ask about any possible footage given to the police.  KIRO 7 News Director Todd Mokhtari told iMediaEthics that the Stranger updated its post Monday afternoon to report after hearing back from KIRO that the station “didn’t give [police] any video” and he didn’t “know why” the police’s statement suggested otherwise.

Last week, Media Bistro pointed to the Seattle Times’ report about potential subpoenas and reported that the “protests turned violent and resulted in widespread vandalism.”

The Seattle Times reported that the “police and prosecutors” wanted “extensive videos” to “identify suspects.” ABC-affiliate KOMO-TV Channel 4 news director Holly Gauntt told the Seattle Times that it has a clip that helps identify a protestor.  The Seattle Times noted that:

“The state’s ‘reporter shield law’ limits law-enforcement access to unpublished material gathered by journalists, but three network-affiliated TV stations contacted Tuesday said that with a subpoena they would turn over footage that already had aired.”

In a separate report, the Stranger reported that Poynter‘s Kelly McBride advised news outlets not provide unaired content without court orders so  they don’t “become a partner with law enforcement.”   McBride is quoted as saying:

“Anything that you haven’t already published, you should not be handing over without a subpoena.”

We have written to KOMO-TV and the Seattle Police Department for more information and will update with any response.