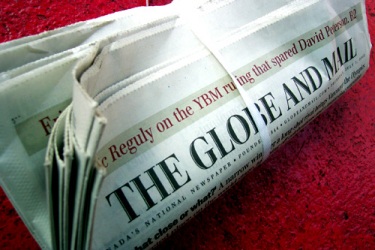 January 5 marks the third article in a 5-part series written by Nick Fillmore, an editor and producer with the Canadian Broadcasting Corporation for 18 years, on the importance of independence in Canadian media. Examining the business reporting of Toronto-based The Globe and Mail–Canada’s largest circulation national daily newspaper–Fillmore’s essay makes an ethical critique of the newspaper’s business coverage and hints at issues important for ethical business reporting in general.

The piece, published on Rabble.ca, a progressive non-profit news site, argues that a recent Globe and Mail story on the possible sale of some Ontario Crown corporations–state-owned enterprises of the province of Ontario–lacked balance from reliable sources on both sides of this issue.

“The cash-strapped Ontario government is looking into the sale of all or part of its collection of Crown corporations, including the provincial lottery company and the retail monopoly on liquor sales, to raise cash to close a $24.7-billion deficit this year,” reads the lede of the Globe and Mail story.

While there are some times when an issue doesn’t have two equal sides to give voice to, Fillmore presents a persuasive case that one side was given significantly shorter shrift than the other in this story. He argues the piece played up the financial gain in selling the properties, but “They failed to seriously discuss any of several arguments against such sales,” Fillmore writes. “They did not quote anyone who might have provided balance to the story.”

More problematic ethically, Fillmore writes, the Globe and Mail followed up the piece with a news story, a column, and an editorial, all supporting a positive view of the sale.  Fillmore says he wrote the paper explaining he thought the coverage was unbalanced, and received an email response. “One of the reporters emailed back that this was because they ‘were writing to a tight space’ and to meet a deadline. He said that future articles would ‘look at the trade-off between selling assets and raising taxes to fund deficit spending,’ as well as other matters.” Yet, no such balance came in the subsequent news story or editorials, according to Fillmore.

Fillmore writes that this is typical of Canadian business publications, even calling it a “classic case study.”

“For instance,” he writes, “business journalists rarely include in their articles information concerning areas such as possible ethical breaches of paying a fair wage, environmental damage, occupational hazards and, particularly in international business, human rights violations.”

StinkyJournalism has not researched Canadian media extensively, so we cannot verify this claim. However, the balance steps Fillmore identifies as lacking at the Globe and Mail align with general ethics guidelines like those of the Society of Professional Journalists. Whether his critique of the Globe and Mail, or Canadian business publishing in general, holds true, his hope of what that journalism should be seems well supported.

Fillmore’s first piece in the series focuses on the failure of corporate-owned media (what we might call mainstream media in the U.S.) to provide reliable and ethical news to the Canadian public. The second in the series argues that traditional media “filter” news and information–potentially to appease advertisers–at the expense of the public’s right to know.

We’re looking out for the final two articles, the next of which will discuss “what independent media could look like and how it could benefit communities across Canada.” Check out Fillmore’s business critique in full here, with links to the rest of the series.