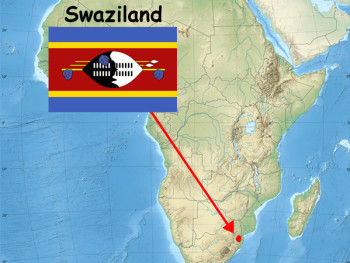 The Kingdom of Swaziland is sovereign country in Africa, surrounded by South Africa except to the northeast it is bordered by Mozambique. (Credit. Flag and Map via Wikipedia)

The article included “names and details of how each attack took place.” It further singled out one woman as a virgin, according to Rooney.

The article in question does not currently appear on the Observer‘s website.

The Swaziland Observer, a newspaper published six days a week, is owned by Tibiyo Taka Ngwane, according to its website.

The report in question focused on a court date for the accused serial rapist, Mcondisi Sinaza Simelane. Simelane has confessed to some of the rapes, according to The Times of Swaziland.

The Observer “unreservedly” apologized for the publication of the victims’ names, saying it was “not intentional,” in a Feb. 21 apology published on its website. The apology was also published in print, editor Thulani Thwala told iMediaEthics by e-mail.

However, the apology used dismissive language by twice calling the ethical breach a “boo-boo.” The apology stated: “We fully acknowledge Tuesday’s boo -boo…Smoke simply got into our eyes and we had some sort of journalistic breakdown hence we believe that acknowledging the boo-boo is the most reasonable thing to do.”

The publication did admit it named the victims in its apology:

“We know we can never match the dubious achievements of all-time champion mistake-makers who take the title with them to the gallows of journalistic Hades, but we have to own up to the foul-up we committed on our Tuesday edition, where we named victims of alleged serial rapist, Mcondisi Sinaza Simelane.”

The Observer acknowledged that it broke “the basic tenets of responsible journalism” and accepted “full responsibility for the glitch.” It went on to “pledge to you dear reader, that we will work hard to make sure we are never again caught with our guard off.”

The apology also said, to its credit, that its identification had the effect of “administering a double dose of trauma to the victims.” It stated:

“While it was obviously not deliberate, it was a bad mistake and capable of causing great distress to the victims and their families, which is why we believe the error we committed fully deserves a formal apology, and we hope it will be accepted.”

However, Swazi Media Commentary’s Rooney didn’t accept the Observer‘s apology, arguing, “This was not some minor mistake like spelling someone’s name wrong.”

The blog is written by Richard Rooney and identifies itself as publishing “freedoms and the ethical issues of journalism practitioners in print, radio and television” in Swaziland. Rooney is a former University of Swaziland associate journalism professor.

Further, Rooney called for the resignation or firing of the Observer‘s editor over the incident.

iMediaEthics has written to the Swaziland Observer’s Thwala for more information about this lapse, its apology and Swazi Media Commentary’s criticism. We’ve also asked if any of the victims complained or threatened legal action. We’ll update with any additional information.