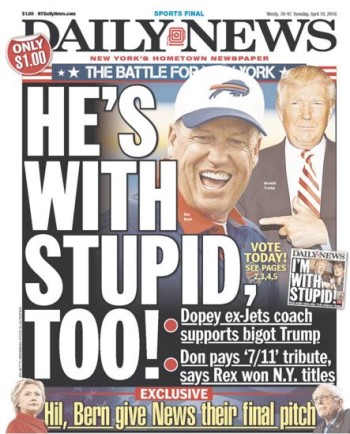 The Daily Beast accused the New York Daily News‘ Shaun King of plagiarizing its exclusive story. But, King claims he directly quoted from the article and the Daily News says it lost the attribution in editing.

Then a previous article by King was flagged on Twitter for the same problem, plagiarizing from fivethirtyeight.com, Capital New York reported. King said in that case he also included attribution but it was lost in formatting.

The New York Daily News has since added two editor’s notes to the respective stories that carry King’s byline, saying that it lost the attribution in editing.

In a series of tweets, King provided his e-mailed versions of his original stories that show he included attribution. He also criticized the Daily Beast for not contacting him privately first and instead going on Twitter to raise the matter.

In an e-mail to iMediaEthics, King wrote, “The Daily Beast was very unprofessional in the way they handled this. They absolutely should’ve reached out to my editors first.”

1. No. I did not plagiarize @TheDailyBeast or @FiveThirtyEight or anyone else. Where I attributed & linked to both pic.twitter.com/PDfapqWucx

2. Here is what I submitted to my editors THIS MORNING where I properly attributed to Kate of @TheDailyBeast pic.twitter.com/sVzblHzNqu

3. Here is where I properly attributed to @FiveThirtyEight. Notice I link, credit them, and include block quotes. pic.twitter.com/wWFJLAEeJX

King tweeted that the Daily News‘ editorial team apologized for the error, that he originally included attribution, links and block quotes, and that he doesn’t go back to read his articles after they are published on the website. King went on to say:

9. Hell, I think too highly of myself, my family, this profession, and the causes I fight for to plagiarize. Take that bullshit on somewhere

“In the end, we are judged not by what’s in our raw copy but what goes up on the printed page or on a website. So while I appreciate that there may have been an effort to do attribution, ultimately we are judged by our results, not our intentions.”

It gets worse. Looks like @NYDailyNews ripped off our story word-for-word. https://t.co/piyl992bCJ

The Daily News agreed with King, saying the attribution was lost in editing. In an editor’s note on the article accused of lifting from The Daily Beast, the newspaper said

“Editor’s Note: An editing error mistakenly removed attribution to a story originally published by The Daily Beast. The mistake has been corrected. The News regrets the error.”

Editor's Note: @thedailybeast attribution was mistakenly removed by no fault of the columnist. We regret the error. https://t.co/icOJvfUFM0

As for the article that didn’t attribute fivethirtyeight.com, the Daily News added this editor’s note:

“Editor’s Note: An editing error mistakenly removed attribution to a story originally published by FiveThirtyEight. The mistake has been corrected. The News regrets the error.”

iMediaEthics has written to the Daily News.