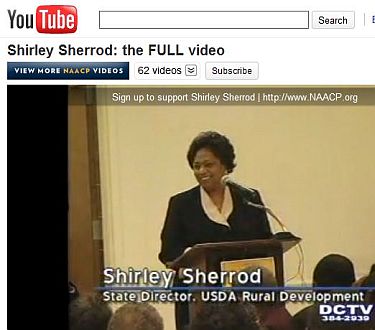 Shirley Sherrod said last week that she plans to sue Andrew Breitbart, the conservative blogger who posted the video that led to her losing her job. Image above is screenshot from Sherrod's full lecture, posted on YouTube at the center of the controversy. (Credit: NAACP, YouTube)

Shirley Sherrod, a former state director for the U.S. Department of Agriculture, announced at the National Association of Black Journalists July 29 that she intends to sue Andrew Breitbart, the conservative blogger who first published the video that led to her resignation.

Bloggers started weighing in on what grounds Sherrod could sue as soon as it became clear that the video clip was out of context.

Now infamous, the two and a half-minute long video shows Sherrod, out of context, telling a March NAACP gathering that she didn’t help a white farmer as much as she should have.  Breitbart’s Big Government website July 19 published the video excerpt and almost immediately, without any investigation of the larger context of the video, Sherrod was asked for her resignation by U.S. Department of Agriculture Undersecretary Cheryl Cook.

Within a matter of days, the full 43-minute-long video was released, which put her statements in context. Just as quickly, the Obama administration, NAACP, her former USDA bosses and the media were apologizing to Sherrod.  iMediaEthics wrote July 28 about the media controversy that surrounded the video.  The incident highlighted the importance of contextualizing controversial statements, as the full video of Sherrod’s speech quickly cleared her name.

Breitbart told Newsweek that “If I could do it all over again, I should have waited for the full video to get to me.”  Yet, he hasn’t publicly apologized to Sherrod.

In a speech at the National Association of Black Journalists, The Maynard Institute reported Sherrod said she won’t be interviewed by Fox News and that she doesn’t want an apology from Breitbart.  But, that she does plan to sue him.  Breitbart told Newsweek July 30 that he won’t “respond to” or comment on Sherrod’s threat of a lawsuit until he sees it.

Breitbart explained in the Newsweek interview that he posted the video not for the purpose of calling out Sherrod, but tried to challenge “the NAACP in its six-day media-enabled negative branding of the Tea Party as racist.”

“I’ve been doing this for over a year, and this is just one more attempt of mine to point out to the general public that there’s consistency here in the Democratic Party to strategically issue the race card. My regret was that has been lost, and Shirley Sherrod became the focus,” Breitbart said.

Does Sherrod Have a Lawsuit?

Turley is a legal scholar, lawyer and George Washington University professor.  Before any threat of a lawsuit, Turley wondered in his July 21 blog post if Sherrod could sue and on what grounds.  He wrote that “the most obvious claims would be false light and defamation.”

“This would certainly seem to be a case of intentional or reckless act. It could also be claimed to be highly offensive to a reasonable person. However, the editor can claim that the tape was meant to show not just the racially loaded comments of a speaker but the reaction of the audience to that portion of the speech. Moreover, Sherrod is still admitting to pretty disturbing racial views in her earlier view of white farmers from the 1980s or 1990s. That is not an entirely complete defense, however, because it still does not explain why the editor would cut out the point of the story,” Turley states.

“If Sherrod were to sue, she would likely make it past initial motions to dismiss and could secure embarrassing discovery in the case, including possible internal emails and communications on the purpose of the editing and release of the video.”

Attorney John Dean wrote on Find Law July 9 that “if Sherrod were to sue, her problem would not just be proving ‘actual malice,’ but also proving damages.”  Dean was Richard Nixon’s White House lawyer for more than three years.

Sherrod’s new job offer, Dean writes, “has largely removed any financial damages that would otherwise have arisen from her forced resignation forty-eight hours earlier.  Moreover, the intense media coverage has further ameliorated the damage — for it is now well-understood by anyone who follows the news at all that Sherrod is not a racist, but rather the victim of Andrew Breitbart’s ugly politics. It is clear that she was unfairly and falsely charged.”

Christian Science Monitor’s Patrik Jonsson suggests July 29 that the Sherrod case creates a more global problem for Internet news publishing. “Even without a lawsuit, many Americans are increasingly questioning the veracity of news from online sources such as Mr. Breitbart’s Big Government website.”

Another issue with the lawsuit is determining Sherrod’s standing:  Was she a public or a private person?

If she is viewed as a public figure, she would have to prove “malice,” namely that Breitbart intended to injure her reputation, according to Christian Science Monitor.

Sam Stein, Huffington Post staff reporter, opined that since the media and government quickly switched from disapproving to supporting Sherrod, any potential lawsuit could be harmed.  Stein cited NYU journalism and First Amendment professor Stephen Solomon, who is quoted as saying that Sherrod “has resolved this in the court of public opinion pretty quick. The point of a libel suit is to restore someone’s reputation… she was damaged very badly in the short term.”

Stein noted that any litigation would likely take several years.

UPDATE: 10/08/2010 11:32 AM EST:  The New York Daily News has an update on the Sherrod story here.  “Newly released e-mails” show that she was asked to resign before the entire video surfaced – so the government didn’t have all the facts or context.  Further, the e-mails don’t indicate “if the White House ordered the firing.”  Sherrod requested in her resignation letter that the whole video be viewed by Cheryl Cook, who called for her resignation.  See the LA Times’ story here.