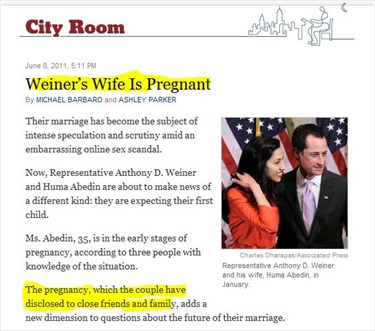 Note: The New York Times reported that Rep. Weiner and Huma Abedin have disclosed Abedin's pregnancy to "close friends and family" -- not the New York Times and the general public. (Credit: NYT, screenshot)

Was it OK for news outlets to break the news that Anthony Weiner’s wife Huma Abedin is pregnant?

That question was broached by Media Bistro’s Fishbowl NY, POLITICO, and others after the New York Times and Gawker reported June 8 that his wife, Abedin, is three months pregnant.

Abedin hasn’t publicly commented yet about the scandal revolving around her husband, who has admitted to carrrying on inappropriate relationships with at least six women online and sending a lewd image to a Seattle, Wash. college student.

By breaking the news of her pregnancy — especially so early on in the pregnancy that she likely isn’t showing any physical, obvious signs of pregnancy, iMediaEthics notes that news outlets are violating her privacy – especially given that she hasn’t sought a public presence during the scandal.

Liikewise, Fishbowl NY commented, “it’s fair to say that newsworthy though this story was, ethically it was on the line.”  Fishbowl NY added that while the pregnancy story is “huge,” it’s “normally…tabloid.”

The Times’ June 8 story was sourced to “three people with knowledge of the situation.”  Gawker’s story, which was posted around the same time as the Times’, was sourced to “a source familiar with the couple’s plans.” Gawker added that “We hear that Weiner has been telling associates—the same ones that he’s been calling to apologize for lying so spectacularly over the past week” about the pregnancy.

POLITICO reported that it had the story for “more than 24 hours” before the Times’ posted its blog about the pregnancy.  POLITICO described the reporting decision as “one of the toughest editorial dilemmas in recent memory” because Weiner’s wife is “an innocent victim” in the Weiner scandal.

The Times’ standards editor, Phil Corbett, explained to POLITICO via e-mail that after discussion, the Times decided Weiner’s scandal and the newsworthiness of the story outweighed any privacy restraints.

“But Weiner’s problems were obviously a big story, and his actions and words had clearly put himself, his private life and his marriage squarely into the news. I think most readers found this information newsworthy in that context. And judging by how quickly and widely other news organizations followed our story, they seemed to agree.”

He added that the Times report wasn’t trigged by Gawker’s story.

However, the Poynter Institute’s Bob Steele criticized the publication of the pregnancy news, POLITICO reported.  He explained that journalists should minimize harm and report the truth but Abedin has “done nothing wrong, and yet she’s caught up in the maelstrom of her husband’s failures. So journalists must be very, very careful and respectful of her in the way in which they report the story, so as not to cause additional harm.”

He also reportedly told POLITICO that “I think she should have control at this point over that information. She’s already by all accounts suffered a great degree of harm by what her husband has done, and then to take away from her the choice of revealing that information about her pregnancy, to me, is ethically irresponsible and unfair.”

iMediaEthics is writing to the New York Times’ ombudsman, Arthur Brisbane, to see if he will take on this issue of privacy invasion in the name of a journalistic scoop. We will update with any response.

UPDATE: 06/12/2011 11:55 AM EST: iMediaEthics wrote to the Times’ public editor’s office asking if Brisbane would be writing about the issue of reporting on Weiner’s wife’s pregnancy and asking if the office had received complaints over the Times’ reporting the pregnancy.

Joseph Burgess of the public editor’s office responded:  “As a general rule of thumb, we don’t comment on whether Mr. Brisbane will be writing about a certain topic for his column or blog.  To answer your second your question, we have had some complaints from readers, albeit not that many.”