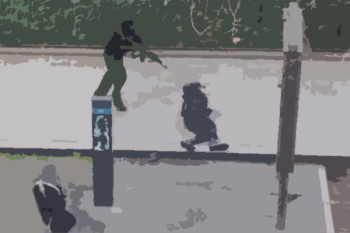 It was OK for Sky News to show a video of the murder of a police officer earlier this year, media regulator OfCom ruled.

Sky News aired a video taken by a bystander showing the officer being shot. It “edited out the final seconds when [the officer] receives a second shot to the head,” the Guardian reported.

The officer was shot after the attack on the editorial offices of satirical magazine Charlie Hebdo in Paris in January.

OfCom decided in its latest set of rulings that Sky News didn’t break the standards for reporting on “violence and dangerous behavior,” its ruling stated.

“Ofcom carefully investigated Sky News’ coverage of the shootings in Paris, which included edited footage of the murder of a police officer,” an OfCom spokesperson told iMediaEthics.

“We found that the channel did not breach broadcasting rules. In particular, we concluded it was in the public interest to broadcast footage of this breaking news story, and that the footage was appropriately limited so as not to cause undue offence,” the spokesperson added.

OfCom ruled that no UK outlet broke its code for airing graphic or offensive material, after receiving 21 complaints, the Guardian said. An OfCom spokesperson said the coverage was “in the public interest” and “handled appropriately.” Complaints were against “news and current affairs programmes on BBC1, BBC News Channel, BBC Radio 4, ITV, LBC 97.3FM, Sky News at various dates and times,” OfCom told iMediaEthics.

Sky News declined to comment to iMediaEthics on the ruling. “We are not making any formal comment. The Ofcom ruling speaks for itself,” Sky News said.

On the other hand, French outlets got in trouble earlier this year for their coverage. “In February France’s major TV and radio networks were formally rapped by the French broadcast regulator, the Conseil Superieur de l’Audiovisuel (CSA), for what it considered to be serious ‘breaches’ in their coverage of the terror attacks,” news site the Local in France reported.

“The warnings were issued for violations including: showing the moment two of the Islamist gunmen cold-bloodedly shot dead a policeman; identifying the two gunmen before police did so publicly; reporting that people were hiding in a Jewish supermarket taken over by a third gunmen; and providing live video feeds of the deadly police assault on the supermarket.”