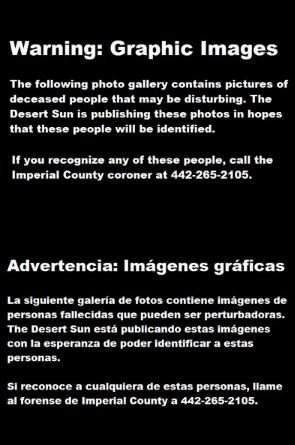 The Desert Sun published photos of dozens of dead bodies, likely undocumented immigrants, on its website. But, the graphic photos weren’t a bid for clickbait, insisted the newspaper’s executive editor, Greg Burton. In an editor’s note, Burton maintained that he hoped his publication would help identify some of the hundreds of unidentified people who have died trying to cross the border.

“I’ve been exposed to photos of the dead, and death up close, many times in my career, and can’t remember three times I’ve opted to publish such imagery,” Burton told iMediaEthics by e-mail.

The Gannett-owned Palm Springs, California newspaper, serving Coachella Valley, carried a warning to readers and the photographs were accompanied with a full package of reporting on the hundreds of people who have died at the U.S.-Mexico border in Imperial County. Burton wrote in a July 6 editor’s note, that “the best outcome is identification” of the dead.

The photo gallery of the dead is only published online and can only be found via the investigation — the Desert Sun doesn’t want readers to accidentally stumble upon photos of the deceased. “We coded the gallery so it does not populate other places online,” Burton told iMediaEthics. “That was critical to our decision. We also made sure that a thumb swipe on mobile view did not accidentally flip to the first image. Mobile readers must link off the mobile story to access the gallery with the warning.”

Below is the warning readers see before clicking images of the deceased.

“There are 20 faces with contact information in case someone can be identified,” Burton told iMediaEthics. “The warning to the gallery is in English and Spanish. The photos were acquired through case files published by the U.S. Department of Justice, NamUs.org system, and tracked to cases we’ve examined in the coroner’s office in Imperial County, California.”

The photos are close-up images of faces, iMediaEthics notes.

The gallery is part of the larger investigation, “Border Bodies: The grim mysteries of Southern California,” which took several months of reporting, Burton told iMediaEthics. The investigation reports: “More than 450 unidentified bodies have been found in Imperial County since 1990, and authorities estimate that at least 90 percent are undocumented immigrants who died while crossing the border. The vast majority of the bodies are Latino men, but their countries of origin are unknown.”

Burton told iMediaEthics by e-mail, “There have been no negative responses to the photo gallery” and that for the most part, “readers have been complimentary.”

As such, after talking with journalism ethicists, the Desert Sun published stories and photos to hopefully get information to help identify the deceased. “Only those with clear features are included” in an online-only photo gallery, he wrote.

Burton argued that “photos of the dead at the U.S.-Mexico border also have journalistic value” because they humanize the story of those crossing and dying at the border.

“We’ve chosen to use them primarily as a means to connect the dead with family,” Burton wrote, noting that the Desert Sun translated some of its reporting into Spanish and sent parts of the reporting to consulate offices in various Central American countries. Here is the Spanish-language link, which includes a link to the photo gallery.