Soccer player Romelu Lukaku: Fake news about him being a Muslim who can’t get Heineken award 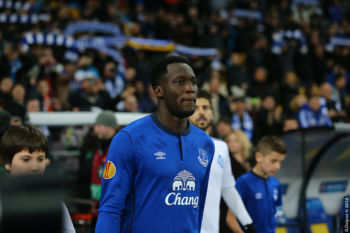 UK news sites the Sun, the Mail, the Express and the Mirror all unpublished stories after falsely claiming Manchester United soccer player Romelu Lukaku wouldn’t be able to receive an award sponsored by beer company Heineken. The reason stated was that Lukaku is a “devout Muslim” and accepting an award from an alcohol company would conflict with his religious beliefs. However, he is Christian, so the story on its face was wrong, Press Gazette reported.

iMediaEthics has written to Manchester United and Lukaku’s representative to ask if any news reporters contacted the club for verification before publishing their stories. We’ve also asked if Lukaku complained over the articles.

Links to the Express, the Sun and the Mirror‘s story now lead to error pages. A search on Google shows the now-unpublished articles claimed Lukaku didn’t get the award because he was Muslim. Neither outlet has appeared to have published a correction; iMediaEthics has written to all three sites to ask if they will publish one.

A Google search shows the news outlets claimed Lukaku was Muslim and not eligible for an award.

The Mail‘s article now redirects to an article on golf, and the newspaper published a July 27 correction admitting its story was inaccurate. iMediaEthics has written to the Mail to ask how long the story was published, for confirmation it was unpublished and if Lukaku complained. The correction reads:

“In common with other publications, a sports report on Wednesday said that Manchester United’s Romelu Lukaku had missed out on a possible man of the match award because his Muslim faith meant that he was on a list of players who were not in a position to pose with alcoholic gifts. In fact, while Mr Lukaku was included on the club’s list, we understand he is a Catholic. We are happy to set the record straight.”

Soccer player Romelu Lukaku: Fake news about him being a Muslim who can’t get Heineken award