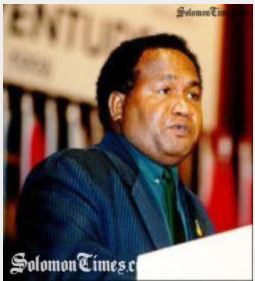 Alfred Sasako, above, was named as the source for a "controversial intelligence report" alleging bribery that was later deemed unsubstantiated. (Credit: Solomon Times)

Sasako gave a six-page document in the form of a report “to the Star as part of a confidentiality agreement,” the PFF reported.  The document accused “Australia of trying to bribe” parliament members $24,000 US to change political parties and “accused the Solomons’ judiciary of conspiring with Australian officials.” The Solomon Islands are east of Papua New Guinea.

However, after much controversy and threats of a defamation lawsuit, the Solomon Islands Government “admitted” the report “is unsubstantiated,” Radio Australia reported Feb. 16.  (Sasako is quoted in a Feb. 11 report that he “welcomes the lawsuit” and that he stood by the report.)

According to a press release from Pacific Freedom Forum, “Follow up stories have focused on a series of responses from those the report mentions, highlighted errors of fact and lack of evidence; and raised questions over who wrote it.”

The Star reportedly backed ” its decision” to out Sasako because of “his position and agenda, and the political and diplomatic repercussions of the reports allegations.”

In response, the Pacific Freedom Forum’s Susuve Laumaea commented that it “expresses concern over the clear attempt of a public official in a position of power to manipulate and subvert the news agenda of” the Star.

The Pacific Freedom Forum (PFF) is a nonprofit “regional monitoring and online network of Pacific media.”

Laumaea stated that the PFF “appreciates the difficulty that the Solomons Star had in deciding to out him as the source of the report. But media codes of ethics protect the confidentiality of sources and are one of the most critical tenets of journalism practice,” Laumaea is quoted as saying.

Laumaea went on to advise that media outlets “test” information from anonymous sources and “Be aware of the agenda guiding” that information’s release.  And, sources “should be made aware they will be named, or be given the choice to have their information returned,” according to Laumaea.

The Solomon Star’s Side of the Story

iMediaEthics wrote to Moffat Mamu of the Solomon Star asking for further comment.  Moffat responded, redirecting us to an editorial from the Star in response to the Pacific Freedom Forum release.

The editorial noted that it had received the PFF press release. “While we were glad to have a bit of positive feedback on our coverage of the issue, we were surprised that in a statement about journalistic ethics, the group making this statement made no attempts to talk with the Solomon Star’s editor to get our side of the story.”

According to the editorial, the Star received the so-called intel report Feb. 6 in the evening and “the staff had to make a decision whether at such a late stage they should print the material and in what form.”

A press release that Sasako reportedly brought with the report was “only attributed a ‘special correspondent,'” which in the Star’s opinion wasn’t the “correct term to use,” according to the Star editorial.

“The decision was made that nothing would be printed in the following day’s paper, there was no time to fully assess the information and the staff were not comfortable with publishing the information as is- which was one sided.

“Instead the story was held until the following day when staff were able to discuss the information and how best to deal with it.  The next day it was decided that because the claims had no information to back them up, they needed to be properly attributed.

“We admit that we should have made sure Mr Sasako understood that his name would be used if we went to print with the story.  Since the use of his name in the Solomon Star, there have been no requests for apologies from Mr Sasako.”

According to the editorial, the Star found out that Sasako “may not have been happy” being named via the PFF press release.

“We admit that dealing with this ongoing story has presented us with challenges but we are willing to continue to face those challenges and try to make the best decisions within the context of the situation.

“We support the work of the PFF and hope to keep the lines of communication with both the Government and Opposition open and fair for the benefit of our readers; the people of Solomon Islands.”

iMediaEthics has written to Sasako for comment and will update with any response.