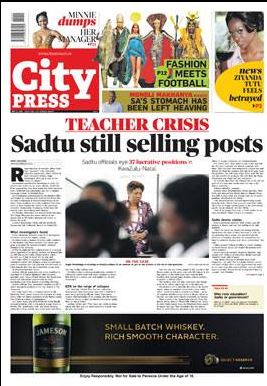 South Africa’s City Press issued a major mea culpa to President Jacob Zuma after discovering it made serious errors in a story about him.

“Our note-taking and reporting were so poor the Press Ombudsman instructed us to retract and apologise. I do so now without hesitation and with contrition. The presidency is not a target board and must be reported on with independence, authority and fairness. We always strive to do so, but failed in this instance, for which I am deeply sorry.”

After reviewing the paper’s reporting, Haffajee wrote that City Press editors found “weaknesses in our systems” by failing to meet appropriate fact checking and ethical standards. Noting it’s impossible to never make mistakes, she commented “even one fact we get wrong is one too many.”

And there have been several issues this year that have warranted attention from the press ombudsman, she wrote. “Fourteen complaints have been made to the ombud against us thus far. We have lost four,” according to Haffajee, who detailed the four incidents the ombudsman ruled against the paper:

“City Press has subsequently discovered that while the essence of Zuma’s comments were correctly captured, they were not made at the dinner but during a separate engagement with the ANC leadership. The president had several meetings on the day in the area, but no dinner. City Press independently sourced the story from several senior ANC and government leaders who were present at the meeting. Similar comments by the president reported by City Press were reported in other media. City Press apologises for the error.”

Haffajee added that the paper still has a pending complaint against it while it has settled another separate complaint.  In addition, the City Press ran 15 clarifications and corrections.

But Haffajee’s column wasn’t just a list of problems the paper is facing but also a collection of ways to fix the issues.

According to Haffajee, the paper is limiting its use of anonymous sources and hiring a new fact-checker. It also is getting outside help by having journalism ethicist Franz Kruger and accuracy watchdog Africa Check  review and train the paper. Those reviews will be completed by the end of next month, Haffajee e-maled iMediaEthics.

Haffajee told iMediaEthics by e-mail: “We have four levels of checks: own (two accuracy checks for reporters to do themselves), section editors, sub-editors and editors.  This introduces a fourth level.   There is no culture of fact-checkers in South African newsrooms – but I’ve learnt from US models.”

Cutting down on anonymous sources will be hard, Haffajee said to iMediaEthics. Currently the paper abideds by the Press Code and Code of Good Practice but moving forward, the paper will require staff to follow tougher guidelines. “We have developed a new set of operations because I am thoroughly unhappy with how easily we grant anonymity and how standard this had become,” she told iMediaEthics. “I tried to ban them completely but my colleagues made cogent arguments against such a radical step.”

Haffajee added that the steps the paper is taking to respond to these issues are proactive, and only the apologies wererequired as part of the complaints.