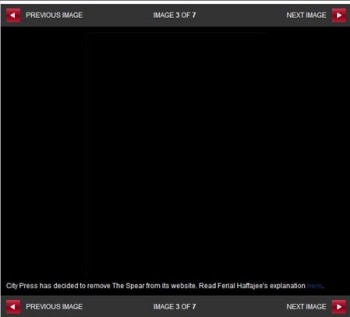 The doctored photograph was published with a set of photos about “satirical artist Brett Murray” and his “latest exhibition, Hail to the Thief II; a take on the politics of South Africa.”

At first the newspaper defended the photo amidst calls for its removal and a boycott.  The newspaper’s editor, Ferial Haffajee, originally stood by the photo as “artistic freedom and press freedom,” Greenslade wrote, noting that South Africa’s Africa National Congress wanted advertisers and readers to boycott the newspaper until the photo is taken off its website.  Zuma is a member of the ANC party.

Haffajee ‘s column defending the photo and its publication also included a few negative responses she expects to receive over the photo, including race and sexuality.  She added:

“To ask us now, as the ANC has done, to take down an image from our website is to ask us to participate in an act of censorship. As journalists worth our salt, we can’t. Besides, the horse has bolted. We published on Sunday.”

However, Haffajee wrote May 28 that the newspaper removed the photo “out of care and fear.”  She noted that she “could not have anticipated that [the photo’s publication] would snowball into a moment of such absolute rage and pain.”

Haffajee called the photo’s removal as being “in the spirit of peacemaking” in light of the reactions to the photo and the newspaper’s becoming ” a symbol of a nation’s anger.”  Plus, because of the photo, the newspaper has received actual threats, she wrote.

For example, on May 26, “City Press copies went up in flames,” a staff member was “removed from a huge trade union congress and prevented from reporting,” and the ANC boycott.

Personally, Haffajee noted that she was mocked by a Twitter account purporting to be from a local political leader, and that some of the newspaper’s staff had received “threats.”

The ANC is still calling for an apology in person, though, the Times of South Africa reported.

We have written to City Press and the artist, Brett Murray, for more information and will update with any response.

UPDATE: 5/31/2012: 1:15 PM EST: Haffajee responded to iMediaEthics’ inquiry.  She told iMediaEthics that she hasn’t found out who was behind the fake account purporting to be politician Patrice Motsepe but that “his lawyers are apparently working to get it taken down.”

She also told us that the City Press won’t meet with the ANC concerning this incident. (As we wrote above, the ANC was calling for a direct apology.)

We asked Haffeejee about the City Press reporter kicked out of a “huge trade union congress” she referenced in her column explaining why the newspaper removed the photo.  She explained the reporter, Sabelo Ndlangisa, “was stopped from interviewing delegates as part of a package about the miner in the 21st century because of the boycott call. He was allowed back in the next day but I still thought it a deeply disturbing moment.  I’ve not seen this happening in the 18 years of democracy here.”

We also asked Haffajee how this incident affects the City Press.  She told us:

“The moment has seen deep outpouring about past hurts (apartheid and colonial) and the various abuses of the black male body.  We are a  nation in the making; our common dignity is still fragile.  As an editor editing in a context, I have to be aware of this, but no, I don’t intend to self-censor.  At the two papers I’ve edited, we have faced about 15 pre-publication interdicts attempts: you learn how to deal with these things each time they happen but the ultimate goal has to push the envelope for free expression and then occasionally get rudely pulled back by public interest as I was now and when we published cartoons of Muhammad.   That we faced bullying, intimidation and the naked use of state power is a first and sets the trajectory in ways I had hoped we could avoid in the democratic era.”