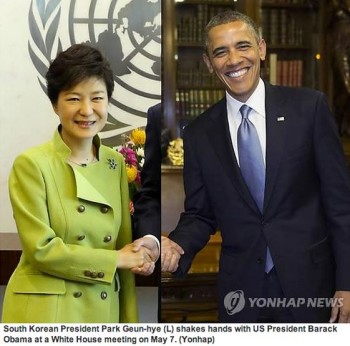 The dual images with the original caption. (Credit: Yonhap, via Business Insider, screenshot)

South Korean news organization Yonhap News Agency published a strange side-by-side image of South Korean President Park Geun-hye with President Barack Obama apparently shaking hands. The image is odd because it creates an optical illusion that the two leaders were shaking hands and the original photo caption didn’t disclose that the photo was two images, not one composite picture.

But, the illusion is too incomplete to be considered a serious Photoshop attempt to make two photos one, in iMediaEthics’ view.

Yet, media outlets including the Atlantic Wire and the Huffington Post accused the agency of a Photoshop job.

But the image consists of separate photos of each leader side-by-side.  The backgrounds for Park and Obama are dramatically different, and the two aren’t lined up correctly. As such, there is an extra set of hands and an extra right shoulder and arm.  The image of Park might have come from a picture of Park “at the United Nations with U.N. Secretary General Ban Ki-Moon,” the Atlantic Wire suggested.

In a May 9 statement on its website, Yonhap said it used the side-by-side photo because it didn’t have pictures from the event yet.

iMediaEthics thinks that Yonhap just took images of Park and Obama separately shaking other people’s hands and cropped the two leaders out.  The problem was the caption: “South Korean President Geun-hye (L) shakes hands with US President Barack Obama at a White House meeting on May 7.”  The caption said that the image showed Park and Obama shaking hands, but that wasn’t true — the picture was edited to make it appear so.

iMediaEthics’ viewpoint seems to line up with what the South Korean agency is claiming.  Since there was zero attempt to use Photoshop to blend the two figures or the background together, it is difficult to accuse Yonhap of doing so. Yonhap said it just mis-captioned the photo.

Indeed, Yonhap News admitted to Huffington Post in a statement that the photo should have been labeled as an “edited file photo.”  An unnamed Yonhap News spokesperson said:

“A Yonhap story slugged ‘Park-NK provocation,’ released on May 8 (Seoul time), carried an erroneous caption for an attached photo. The caption should read, ‘This edited file photo shows South Korean President Park Geun-hye (L) and U.S. President Barack Obama.’ We regret the error and any inconvenience this might have caused.”

Further, it “denies ‘photoshopping'” the image and said that it was just an error. In response to media criticism of the weird composite image, Yonhap said “some foreign online media outlets have raised suspicions regarding the authenticity of the image, but the photo was not an attempt to ‘photoshop’ two clearly different images.”

The Atlantic Wire, one of the outlets accusing Yonhap of a bad Photoshop job, provided evidence of why the agency wouldn’t have Photoshopped the two images into one composite. It pointed out that there were many real photos from the very real meeting between Park and Obama.

iMediaEthics has written to Yonhap asking why it used the composite image instead of any of the real news images. We’ll update with any response.

We’ve written numerous times about Photoshop issues from North Korean news outlets, as you may remember. In March, the Agence France Presse retracted a Korean Central News Agency photo that the AFP concluded was doctored. The image of a training drill duplicated hovercraft.

In late 2011, U.S. news outlets including The New York Times retracted a Korean Central News Agency photo from Kim Jong-il’s funeral.  The image, which had been provided to European Press Photo Agency by Korean Central News Agency, had deleted a group of people and a camera from the funeral. The European Press Photo Agency told iMediaEthics at the time that it had tried to get press credentials to the funeral to get its own picture, but the agency “was denied entry by the North Korean authorities.”

And in July 2011, the Associated Press retracted a Korean Central News Agency image of a flood because it was faked.  The image showed several men wading through floodwaters but their clothes were dry.